Sunset Park residents concerned about Industry City turning their community into "the next hot neighborhood" may have to brace themselves for a pumpkin spiced explosion: a giant Starbucks "destination" Roastery could be on the way.

On Sunday, Tony Giordano, an administrator of the Sunset Parker Facebook group, posted a blistering critique of Industry City's management and those part of "Gentrification Inc." who would develop the area without considering its current residents.

User Dana Dobrzynski, whose LinkedIn profile lists her current position as a Starbucks store manager, chimes in about a "Roastery coming to Industry City" from "Seattle" that would employ 300 people. 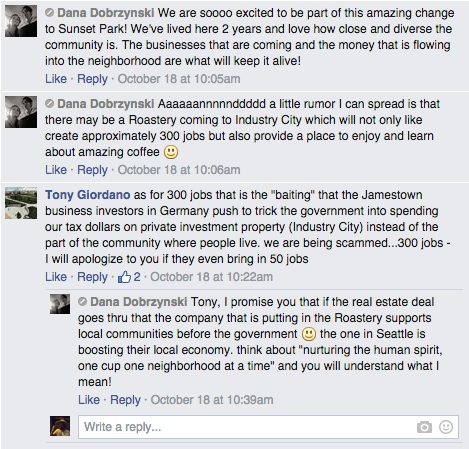 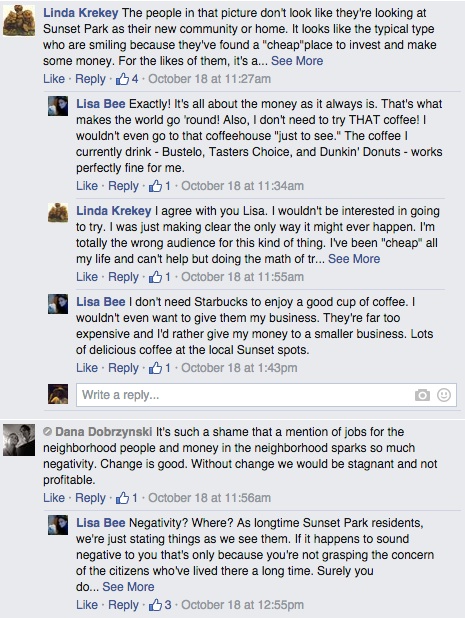 The thread then devolves into a reprise of the Bushwick Knitting Mural fight, with Dana eventually declaring, "I'm happy for the gentrification and will be happier when it moves these 'angry old timers' out." 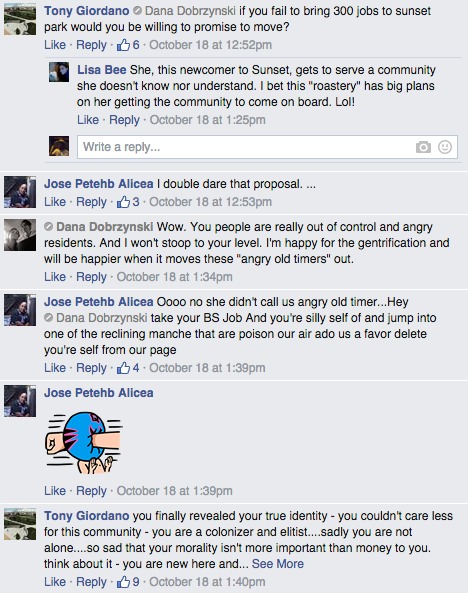 A spokesperson for Starbucks confirmed that Dana is an employee, but said that her comments were "pure speculation." Asked if they could deny that a Starbucks Roastery is coming to Industry City, the rep responded, "We don't comment on speculation."

"Sadly, more that a few folks on Sunset Parker see gentrification as a good thing and very positive for Sunset Park," Tony Giordano told us. "I think it is just a lack of understanding of what gentrification would truly mean."

Currently more than half of Sunset Park's residents, who are predominantly Hispanic or Asian [PDF], are rent burdened; nearly 50% of households in Sunset Park have an annual income of $40,000 or less [PDF].

Giordano believes that the group of investors and developers, including Jamestown LLC, have yet to deliver on their promises of high paying jobs for Sunset Park residents.

"They came here with a plan to turn a quick and large profit by maximizing space—utilizing basement areas and storage areas for tenancy and to cut expenses and get the City to contribute to their infrastructure improvements—at the expense of the rest of the community," Giordano said.

A rep from Jamestown has not responded to repeated requests for comment. Smorgasburg and Brooklyn Flea recently made Industry City their cold-weather home.

As for Starbucks, Giordano says he has "no problem" with them opening up a Roastery in Sunset Park, provided "they would be involved in civic activities like the owners of Li-Lac Chocolates are."

"I actually feel bad for the woman," Giordano said of the Starbucks employee. "She really didn't know the 'audience' that she was addressing and I think she got in deeper than she expected."