April Fools jokes aren't just about fake Playmobil sets and Jar-Jar-related violence, there are loads of food pranks today too! Though none quite matches last year's brilliant In-N-Out hoax some certainly don't suck. Desperate Chefs Wives and Starbucks on scooters, anyone?

Eater notes that chef Jose Andres got the ball rolling this morning when he tweeted about a "new reality show on @nbc "Desperate Chefs Wives" with my wife, @tom_colicchio @NoReservations @ericripert @conanobrien wifes coming fall." That led to a nice response from Ripert while the other chefs (and Conan) have stayed quiet regarding the project. The actual Desperate Chefs Wives blog has remained similarly mum.

In other chef specific prank news, the crazy kids at Tasting Table persuaded Eddie Huang of Baohaus to make a video promoting his new concept, Huang Way, a "Taiwan-meets-Deep South spot" which boasts "a watertight door policy (including a secret phone number) and iPads built into every table." If the iPads didn't give it away the "purely decorative" carp farm on the roof certainly should have. 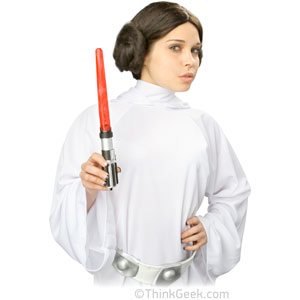 Not content with their genius Playmobil Apple Set, ThinkGeek also has a delicious Star Wars Lighsaber Popsicle for you to suck down on, though they warn that "This is not the stock you're looking for."

Hot on the heels of launching their Serious Eats: Drinks subsite, Serious Eats today launched three new sites: Serious Wheats, Serious Beets and, our favorite, Serious Teats (which includes such columns as "I Got Nipples: Can you milk me? We bring in your favorite celebrities to SE World Headquarters and find out!")

Taking their prank very seriously, Grist has an awesome essay on Spelt: The Silent Killer. They almost had us with their references to Gibbon and Monsanto until we tried to read the academic papers they were linking to.

Finally, Starbucks today announced every coffee addicts dream. With Starbucks Mobile Pour you'll never have to worry if your Starbucks is on fire. Just order your java on your phone and a nice Starbucks employee on a scooter will come deliver your joe wherever you are.

#April Foods
#april fools
#april fools day
#Desperate Chefs Wives
#eddie huang
#eric ripert
#josé Andrés
#starbucks
#tom colicchio
Do you know the scoop? Comment below or Send us a Tip
A new Gothamist is coming! We’ve moved comments over to our beta site. Click here to join the conversation and get a preview of our new website.