Spicy tuna sushi has been connected to an outbreak of Salmonella Bareilly in 20 states, according to a report from the CDC. 12 people have been hospitalized nationwide (no deaths, luckily), and New York State has seen the highest number of reported sicknesses (24 cases) by far. An investigation conducted by local, state, and federal officials has homed in on a frozen raw yellowfin tuna product known as Nakaochi Scrape, produced by the Moon Marine USA Corporation, based in California.

Nakaochi Scrape is, in the CDC's unappetizing words, "tuna backmeat that is scraped from the bones of tuna and may be used in sushi, sashimi, ceviche, and similar dishes. The product looks like raw ground tuna." Mmm, who'll be the first "extreme eater" to make a Spicy Tuna Pink Slime burger and consume on YouTube for instant viral infamy?

Moon Marine's spicy tuna has been recalled, and the investigation is ongoing. So far the CDC has located a total of 7 "clusters" at restaurants or grocery stores where 2 or more ate before getting sick. "In each cluster, at least one ill person reported eating sushi purchased at the restaurant or grocery store," says the CDC. The cluster gut bombs blew up in Connecticut, Maryland, Rhode Island, Texas, and Wisconsin. 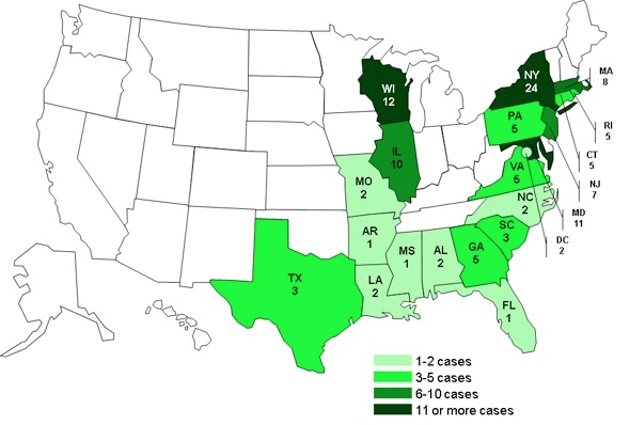 According to the FDA, Salmonella infection symptoms include "diarrhea, fever, and abdominal cramps 12 to 72 hours after infection. The illness usually lasts four to seven days, and most persons recover without treatment. However, in certain cases, the diarrhea may be so severe that the patient needs to be hospitalized. In these patients, the Salmonella infection may spread from the intestines to the blood stream, and then to other body sites and can cause death unless these patients are treated promptly with antibiotics." If you've ever eaten poisonous blowfish, you know the drill:

#salmonella
#spicy tuna
#sushi
Do you know the scoop? Comment below or Send us a Tip