If you miss out on Eggslut, maybe you'll have better luck at Wowfulls, which is celebrating its new Houston Street cafe with deals on their Hong Kong egg waffles all weekend. The first 50 customers on Friday receive $1 waffles, with a special $5 deal on waffles lasting the rest of the weekend.

It's also weekend one for Smorgasburg this weekend in Williamsburg and Prospect Park. There are 26 new vendors debuting this year, including the now infamous Spaghetti Donuts from Pop Pasta and tons of other ways to stuff your face if that line's too long. 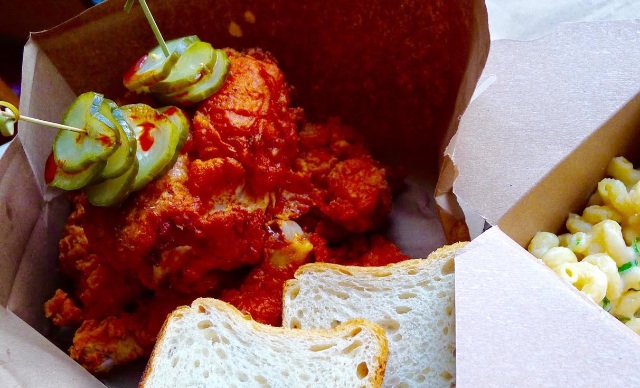 Due to popular demand, #BlazingFeathers returns to Vic's on Great Jones Street with Hot Chicken (choice of heat level) with sides including pimento mac and cheese, black eyed peas, slaw and a dessert of banana-nilla wafer. Grab the fiery bird for $15 a plate, with sides and sweets an additional $5. Looking ahead, subsequent Sundays will see pop-ups at Vic's including "old school New York delis, Parisian falafel stands, Jersey bakeries and more." First come, first served.

Bed-Stuy's Bar LunÀtico begins a Gospel Brunch on Sunday, which they'll continue through June. For the first iteration, gospel singer Gary Samuels and organist Greg Lewis are on the docket, performing two sets beginning at 2 p.m. There's a $10 suggested donation that goes to each week's artists. Their brunch menu offers a little something for everyone, from Vegan Ranchero ($15) with potato cakes to a Breakfast Sandwich ($10) on a croissant to a spicy Tuscan Kale Salad ($8) with roasted beets.