Our latest installment of Quick Bites brings us to the Hotel Rooftop District of Williamsburg.

THE VIBE
It's rooftop restaurant and bar season here in the big city, and Williamsburg—which features four of these once-exotic creatures on a three-block stretch near the northern end of Wythe Avenue—has fully embraced the genre. All four are perched atop boutique hotels: Andrew Carmellini's Westlight at the William Vale; the Water Tower Bar (situated inside a faux water tower) at the Williamsburg Hotel; Lemon's at the Wythe Hotel, from the Chez Ma Tante team; and, the one we're here to talk about today, Summerly at the Hoxton. This one features a relatively ambitious food menu (in other words, not just cheese plates and a few "bites") from Warren Bair of nearby neighborhood favorite Five Leaves.

The first and I guess most important thing to say about Summerly is that the views are lovely up there. Most of the restaurant, with seating for at least 80 at proper tables, barstools, and lounge areas outfitted with couches, looks out unobstructed across the East River to the Manhattan skyline. Obviously, this is an exceedingly pleasant vantage at which to sip a fancy cocktail and eat your dinner. But don't sleep on the northern and eastern vistas of North Brooklyn, which can be seen from a seating nook around the corner.

For a more down-to-earth (but still elevated) dining and drinking experience, Hoxton also just opened Backyard, a second-story spot overlooking North 9th Street. The menu here is more casual than upstairs—including the booze: $25 pitchers of beer instead of $16 Cucumber Mojitos—and the atmosphere is meant to evoke a chill suburban hang at your buddy's house. There's no swimming pool, but there is a ping pong table. A pair of water tanks offer some decorative drama, paying homage to the Rosenwach Tank Company, the former tenants of this lot who moved on after a fire, possibly sparked by Roman-candle-wielding hipsters, severely damaged their headquarters in 2009.

THE BITES
Summerly and Backyard seem like perfectly pleasant places to get drunk, but the food at both is terrible. It's hard to believe chef Bair would dare put out any of the three dishes I ate at Summerly over at his Five Leaves spot (which, among other standouts, has a killer Avocado Toast). The Clam Pizza, for example, was possibly the worst pizza I've ever been served at any restaurant, mostly due to the crumbly, miserable crust... but the hard, flavorless bivalves offered no assistance in the matter either.

The $28 Lobster Roll I saw at other tables looked too tiny to make me anything but sad, so I went with the $21 Double Stack Burger, which... also made me sad, the whole enterprise overwhelmed by a sweet mushy onion jam. The sesame bun was fresh, at least. A miserly side of unpleasantly-seasoned Waffle Fries pushed the standard-issue combo into $30-something territory.

My second dinner at the Hoxton complex was spent among some sprawled out tourists and a local couple who said they come to these hotels on Wythe "all the time" because "they're so nice." Perhaps they haven't tried the Open Face Tuna Melt which, admittedly, is a strange choice to begin with at a place like this, but was also somehow even worse than you might expect. I mostly blame the visibly stale bread, and also everything else about the ($14) half-sandwich. The Wood Roasted Nachos were fine until all that overly sweet Texas Chili was ladled on top. And the Pulled Pork sandwich was just gross.

THE VERDICT
It's hard to understand how an operation with this much money and even some local talent can put so little love into the food, but there you have it. That view sure is pretty though. 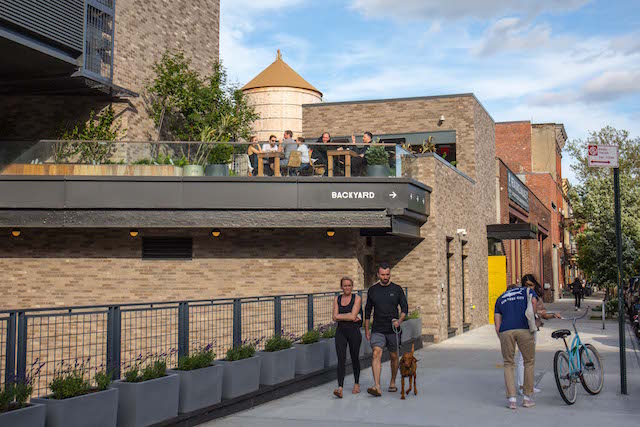 #backyard
#hoxton
#quick bites
#summerly
#the grim eater
#williamsburg
#original
Do you know the scoop? Comment below or Send us a Tip