Spam Is Making A Comeback At Hip NYC Restaurants

On a recent Monday night at New York Sushi Ko, between courses of braised pork belly with dollops of yuzu foam and aged, wild caught blue fin sushi, chef John Daley reached over the bar to present a bowl of Spam fried rice. Topped with seared ahi and flourishes of fresh pineapple, the dish was a far cry from the hangover breakfasts of leaner times—and an unexpected lowbrow pop on the restaurant's $135 special one-night tasting menu.

"Is it just regular Spam? Like from the can?" asked LauRenn Reed, one of five diners seated at the 7-seat sushi bar. All were partaking in an offbeat, Hawaiian-inflected night of Daley's omakase, which loosely translates to "chef's choice."

"Fresh from the can!" joked Daley, a former chef at 15 East who spent a couple of years living on Maui. "And sourced locally from the nearest bodega."

"Gosh, I haven't had Spam since the eighties," said Reed, staring into her bowl. "I grew up with it. I'm not anti-Spam at all. It just reminds me of poorer days."

There was a gap in conversations as palates processed the orchestra of flavors to the loose swing of reggae pouring out of Daley's speakers. The Spam—diced and roasted—popped through with salty bursts.

"It's so good though!" Reed declared. "It reminds me a little bit of oxtail. So savory. I'm thinking of all the ways I could eat it." 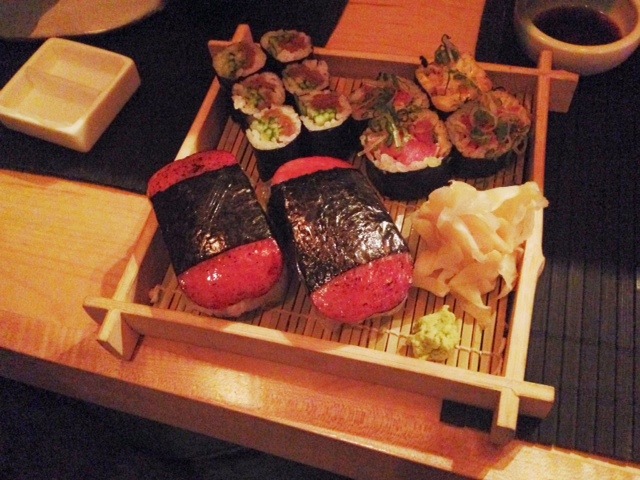 The final course, a plate of sushi, included Spam musubi, a Hawaiian staple composed of a slab of fried Spam affixed to a bed of rice with seaweed. For an added level of authenticity, Daley wrapped it in saran wrap, a nod to the Hawaiian street food available at local gas stations and 7-Eleven. Next to fish sourced from Tsukiji Market, it's easy to interpret Daley's use of Spam ironically, a suggestion he's quick to dismiss.

A little after 11, a group of four walked in, shedding their coats for the waiter.

"Yo John! You still doing the Spam thing?" asked Leah Cohen, a contestant on Season 5 of Top Chef and the chef at Pig and Khao.

"Got it!" Daley fired back.

Amid a food scene populated with grass-fed beef and humanely butchered pork, it's surprising that this brick of protein has been popping up on New Yorkers' menus. This isn't an artisanal, organic or house-made variety. It's a gelatinous block of Hormel canned meat; sliced, glazed, and fried without a hint of irony or intended shock value. And in pockets of New York known for more refined palates, it's garnering a surprisingly enthusiastic response.

"For a lot of Asians it really is soul food," said Mike Briones, the owner and chef of Suzume, a small, candlelit ramen and sushi bar located in Williamsburg. Last fall, Suzume began serving Spam musubi as a special, a nod to the few years Briones spent living in Honolulu. The reception has been overwhelmingly positive. "Usually it's one person at the table who understands Spam, and then the other person will try it. People are ordering it and asking if we're going to put it on the menu and taking it to go." 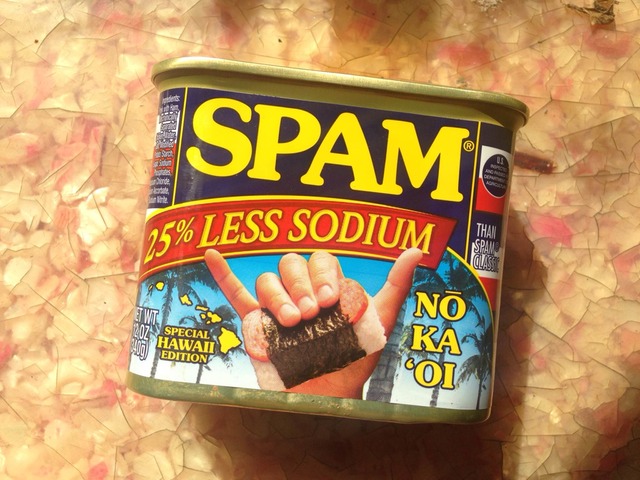 It's been a long and unlikely journey from Spam's humble origins, as a product born out of the Great Depression to a special featured at a trendy Brooklyn restaurant. Produced in Minnesota, the blue cans of blended pork shoulder and ham debuted in American grocery stores in 1937, peaking in popularity during WWII, when troops stationed overseas referred to it as "Special Army Meat." Since then, the pink brick has been associated with harder times, the outcast of preserved meats, left to linger in the dark recesses of the cupboard. A Monty Python skit from 1970, in which two diners are confronted with a Spam-centric menu, gave birth to "spam" as electronic junk mail; an inescapable annoyance.

In Hawaii, which consumes around 7 million cans of Spam each year, the connotations are more sunny. An annual Spam Jam festival sees a main street in Waikiki closed to traffic in celebration of the beloved street food. Local McDonald's serve Spam breakfast with eggs and rice. In New York, framing Spam around the context of Hawaii is a logical way to highlight its tasty attraction.

For Daley, who grew up in New Jersey eating Spam for breakfast, the luncheon meat felt synonymous with riding the bus. He vowed to never eat it again, even after moving to Maui for a couple of years as an adult. "But you live in Hawaii long enough and you end up eating musubi one day," explains Daley. "You have $2 left, one beer and one musubi. And it's like 'Are you fucking kidding me?' It's absolutely awesome. Once I had it, I was hooked." 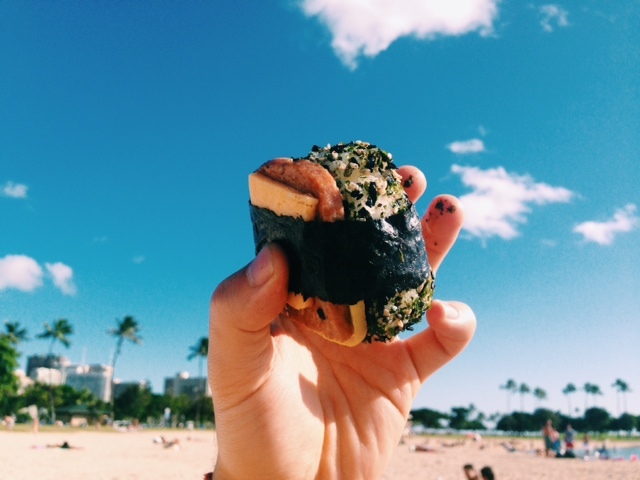 The consensus amongst chefs is to avoid the desire to elevate Spam into a more refined product, and instead focus on pairing it with the right ingredients. Briones said it took a while for his cooks to figure that out. For Suzume's Spam musubi they experimented with fancy glazes and different cooking methods before Briones interjected, explaining that the relationship between the Spam, rice and nori already composed the perfect umami, or harmony of flavors. In short, when it comes to Spam, less is more.

Spam isn't just popping up as a surprise item on otherwise upscale menus. Onomea, a Hawaiian restaurant that opened last August in Williamsburg, serves Spam musubi and Spam fried rice next to other humble island staples, like shoyu chicken. For Hawaii born Cystalyn Costa, Onomea's 24-year-old owner, incorporating Spam on the menu was a no-brainer. "You can't open up a Hawaiian restaurant without having Spam on the menu," she said. "Spam is Hawaii. Hawaii is spam."

Comfort and familiarity was also what inspired the Spam fried rice at King Noodle, which opened last July in Bushwick. Owner and chef Nick Subic grew up in Michigan eating Spam omelets on Christmas morning as part of his family potluck. The warm bowl of pan-fried Spam sprinkled over a mound of rice, eggs and green onions comes served in a less familiar setting: psychedelic track lights illuminating walls coated in day glow graffiti. "To me it's one of the most simple and comforting dishes on the menu," said Subic, a former chef at nearby Roberta's. "We just want it to be something on the menu that when you try it, you go 'Oh yeah, that's delicious.'" 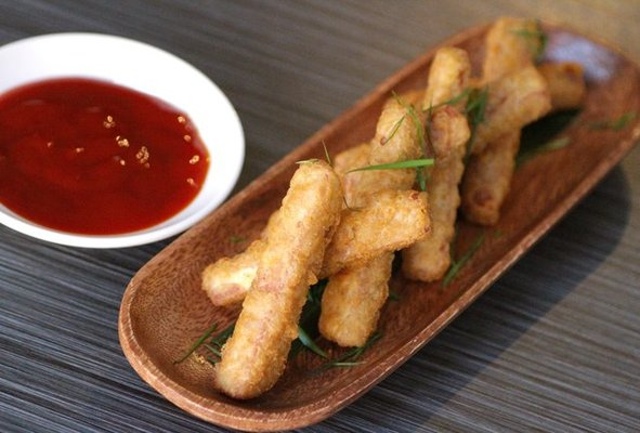 Spam Fries at Maharlika (via Yelp)

For a more experimental approach there's Maharlika, a Filipino restaurant in the East Village that serves—in addition to other dishes with Spam "fresh from the can"—beer-battered Spam fries. Chef Miguel Trinidad came to his fries the way most people come to Spam: he was running out of food. At the last minute, a wedding reception that Maharlika hosted jumped from 50 guests to 75. In a pinch, Trinidad battered leftover pieces of Spam and threw them in the fryer.

"Everyone went nuts," he said. The next week it was on the menu. "I wasn't ordering enough Spam. I would order a case, 12 cans, and it would be gone in two days. People were just coming for the Spam fries."

While Spam's reputation may always precede it, it's clear that New Yorkers are starting to recognizing its virtues, thanks to a small but growing handful of chefs and business owners, a feat in an increasingly health conscious food scene.

"At the end of the day, it's not good for you," said Briones. "Personally I'm really healthy. All the protein here is as hormone and biotic free as possible. Except for the Spam. But it's good for your soul."

Mitchell Kuga is a freelance writer definitely not based in Brooklyn and an editor of SALT, an upcoming food magazine about chefs and injuries they suffer on the job. Follow him on Twitter or email him at mitchellkuga@gmail.com (no spam please).

#hawaii
#king noodle
#maharlika
#spam
#sushi ko
#suzume
#longform
#original
Do you know the scoop? Comment below or Send us a Tip