Every day since Christmas, Team Smorgasburg has held tastings in their Crown Heights office—about 75 in all, culled from some 300 initial applicants—to determine who would be joining the still-insanely-popular weekend food market, opening this Saturday in Williamsburg and on Sunday in Prospect Park. In the end, 26 new vendors made the cut, most of whom were on hand at Berg'n last night for a sneak preview.

As usual, I tried everything. Here are a few highlights:

• The Burger Supreme, which you may know from its stint as a pop-up at Mission Chinese, is serving a simple but perfect "griddle-steamed" Fleishers beef patty, cooked medium rare, with melted American cheese and a mustard-based sauce on a potato roll. Nothing flashy, totally delicious.

• Ube Kitchen has several Filipino classics on offer, but the one you'll be seeing all over your Instagram feed is the Classic Halo Halo, a hollowed-out dragon-fruit shell filled with ube ice cream, blackberries, mangos, dragon fruit chunks, tapioca, jackfruit, red mung beans, toasted coconut flakes and a coconut milk sauce. It's sweet, refreshing, and bursting with bold flavors.

• The Wisconsin natives behind Baked Cheese Haus ship in wheels of homemade stinky stuff from their native land for a first-rate Raclette sandwich, melted to order of course, and paired with a nice gamey prosciutto, cornichons, and scallions on a crusty roll.

• Belmere Catering is making several traditional Haitian dishes, including a rich and fiery pumpkin Freedom Soup and "Pigs on a Stick," which is basically deep-fried fatty chunks of well-seasoned pork belly.

• John's Juice serves pulpy beverages made by sticking a pulverizer right inside a whole piece of fruit—dragon fruit, orange, pineapple, grapefruit, and watermelon are all planned—smashing the hell out of it, squeezing in a bit of simple sugar, agave, or ginger syrup, putting in a straw, and done. It is indeed, "All Juice, No Cups".

• The duo behind Strange Flavor Burger is branching out from their shack in Bushwick's The Johnsons to feed Smorgasburg goers an excellent Mapo Brisket sandwich, topped with tofu crisps and served on a chewy sesame roll, among other full-flavored, decadent delights. 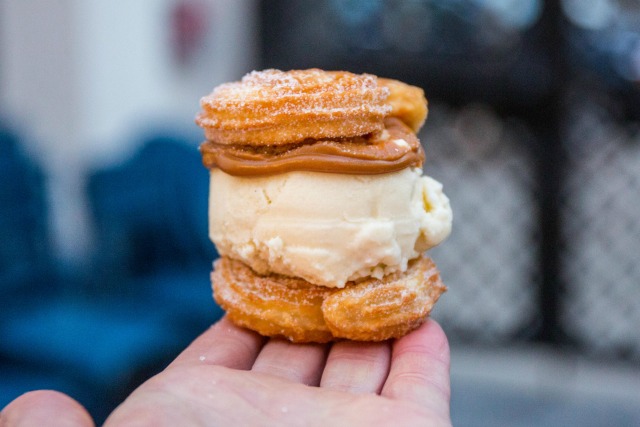 Other new dishes of note include Spaghetti Donuts from Pop Pasta, which are gimmicky to be sure, but also taste good and are fun to eat; ice cream sandwiches from Dulcinea Churros (I had the horchata ice cream with a generous squirt of dulce de leche on a sweet churro "bun"); Cambodian street food from Kreung, including a memorable fermented fish paste called Prahok, served with rice and various root vegetables for dipping; and Prodigy from Mobb Deep's Commissary Kitchen, which cooks up dishes inspired by his three years in prison, teamed here with Eddie Huang's Baohaus crew.

This summer both the Smorgasburg and Brooklyn Flea markets will be "zero waste" events, said co-founder Eric Demby, which means all dishes and utensils are compostable, with no cans or plastic bottles allowed. So instead of vendors selling bottled water, there will be free filtered water filling stations located around the park.

And remember, as tempting as it may be to make fun of ramen burgers, raindrop cakes, and spaghetti donuts, these are all mom-and-pop-style small businesses, the kind everyone always complains there aren't enough of anymore in our city. Smorgasburg will feature some 100 different vendors every Saturday and Sunday, none of whom are getting rich by busting their ass out there trying to make something good in less-than-ideal cooking conditions, but all of whom are pursuing some sort of dream.