Everyone likes seafood, but what exactly is it that we like? As has been proven time and again, you don't always get what you pay for when it comes to fish. And for the latest proof, look no further than the newest report from Oceana. As part of a national study, the group tested fish in New York City and found that every sushi venue they sampled sold mislabeled fish—with 39 percent of the fish sampled being mislabeled! Blame it on on the fact that "more than 90 percent of the seafood consumed in the U.S. is imported, and less than 1 percent is inspected by the government specifically for fraud." 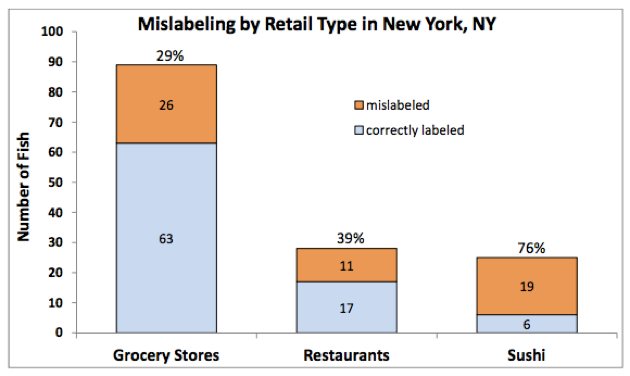 According to Oceana, they tested more than 1,200 samples of fish over the last two years and found that of the 46 types they purchased 59 percent were mislabeled. The most commonly mislabeled fishes? Salmon, snapper, cod, tuna, sole, halibut and grouper. Salmon was the most commonly mislabeled fish at 87 percent, though often the mislabeling was more to do with calling farmed Atlantic salmon something else (wild, king and sockeye). Meanwhile 84 percent of the "white tuna" they sampled was actually escolar, "a species that can cause serious digestive issues for some individuals who eat more than a few ounces." Read more on that here, IF YOU DARE. 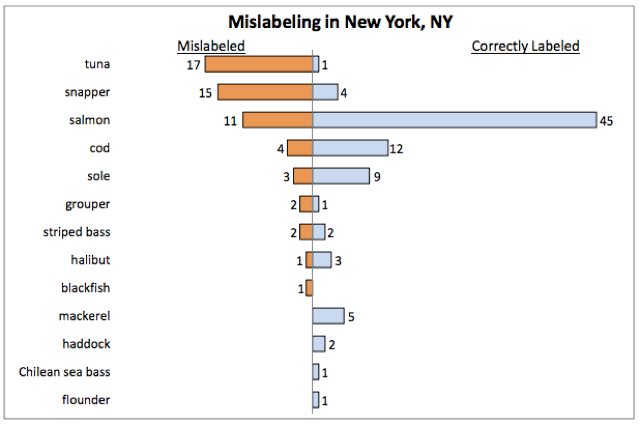 So what to do? Well, you can buy whole fishes—that is very hard to fake. And if you are going out? You can first off ask a lot of questions. If the restaurant doesn't have good answers they probably don't have good fish (even if they don't know it themselves). And watch out for prices that are too good to be true. Because they probably are.

Meanwhile, as far as we can tell, Oceana did not turn up any pig rectum in their survey. So there is that.

#fish
#fishy
#fraudulent fish
#oceana
#report
#sushi
Do you know the scoop? Comment below or Send us a Tip