Someone Dies From Diabetes Every 90 Minutes In NYC

At the risk of making you feel guilty about your glazed donut breakfast sandwich, but here's your latest reminder that diabetes is a serious problem in NYC. According to a report from the NYC Health Department, the diabetes death rate reached an all-time high in 2011, with 67 deaths per 100,000 population, while the overall death rate in NYC has been decreasing. The number of diabetes-related deaths in NYC for 2011 was a record 5,695, and the Health Department estimates that, on average, one person dies every 90 minutes in this town from diabetes-related causes.

The Health Department has tried to rip giant sugary beverage from New Yorkers' hands, only to be thwarted by Big Soda... for now. Officials are also trying to lower the body count by increasing the number of green carts in neighborhoods with a lack of fresh produce, and today the city is launching a new radio ad campaign educating New Yorkers about the risks of diabetes. 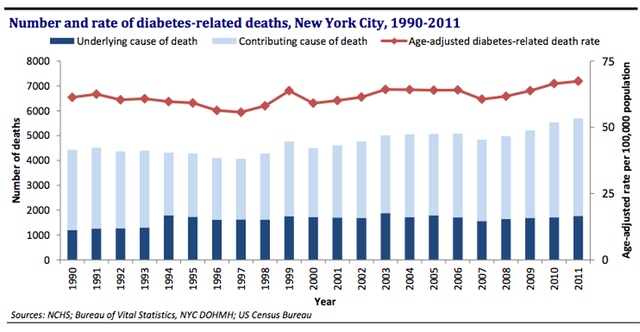 If you're like us, however, the greatest threat to your blood sugar comes from the relentless deluge of snacks and all-around-crap that gets shoved in our faces on a daily basis. Here's our guide for resisting the unstoppable evil tide of tempting treats—so far none of the tips have actually proven successful for us in the field of battle, but maybe you'll have better luck.

#diabetes
#health department
Do you know the scoop? Comment below or Send us a Tip