Though organizers billed it as the Museum of Ice Cream meets "sexy" Asian drinks, The Boba Room pop-up exhibit may have more in common with the failed Great Googa Mooga experience.

The exhibit had only been running a few days before the negative reviews began piling up on Yelp.

"This doesn't deserve any stars," Vicki T. declared on the peer review site. "There was no space to take photos of the colorful bubble wall because it was so crowded. Once we got to the bubble room, everything was deflated and dirty. We were yelled at telling us not to throw the balloons in the air. But that's what people do, we throw it in the air. There was also a wall of 4 balloons lined up that looked pretty dirty and deflated. After further review, this seemed like a failed art school project by art school kids."

The person who tipped us off to the bubble tea blunder concurs that the place looks "run down and dirty" and "it advertises itself as a boba theme park, or museum but there is nothing theme-parky or museum-y about this place." 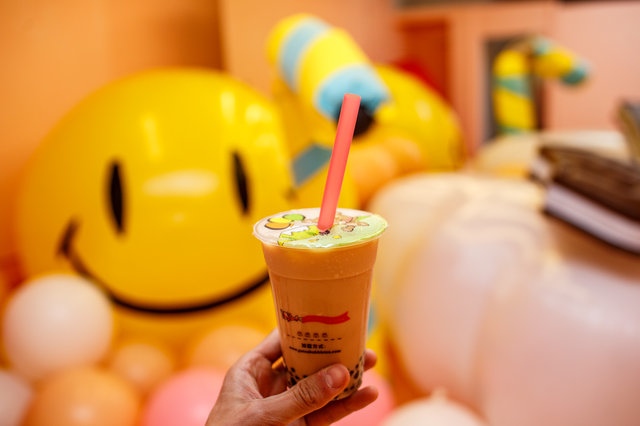 Lines and wait times—including an inefficient ticketing system—contributed to the overall frustrations.

"We waited on line outside for an hour, when we got in there was another line for the 'attraction,' a room of inflated balloons...like there really isn't much to the boba room," wrote Peter C. of Brooklyn. "Me and my friend just want to get out of there as soon as possible."

Yelpers, like internet commenters, are known for their pithy digs:

"I had way better things to do with my day than to go into a dirty ball pit and felt like this was a complete waste of time." - Eve N

"You'll have more fun going to a McDonald's ball pit and jumping into that." - Tammie K.

Besides the crowds and disappointments surrounding the "art," confusion about what bubble tea would be available—coupled with long lines to get the bubble tea that was included in the $10 cost of admission—were the source of much consternation. "After the room, the line for the bubble tea wrapped around," recalled Kimberly H. "There was no one really directing where the end of the line was and so it got real crowded fast. They ran out of most of the flavored too just leaving taro and lycee/lime."

One of the organizers, Yanz Zeng, acknowledges the failures and admits things like a "better ticket selling system to reduce wait time" could have improved the experience and that they could have been "more clear [about] what people can expect here before we open to public."

Zeng says nobody actually complained to the organizers in person and that she could "tell most of [the] people are happy here but I do think we didn't meet the expectation of some people." Though Zeng and co-organizer Iris Danlu Xing have organized photography exhibits and other live performances, they concede that this is "very different" from the exhibitions they've tackled previously and "the most interactive one [they] have done so far."

The reviews weren't all outwardly negative. Those living the experiential life on Instagram were happy to pose for selfies with inflated rainbows and post their cotton candy-topped bubble tea (an extra fee) on the social media platform.

Sometimes you just have to play in a ball pit @katwig2015

This just proves Instagram's all about impressing your followers with your fabulous life peeing in the best bathrooms where Yelp is where you turn to shit on everything.

#boba room
#instagram
#open space gallery
#yelp
#original
Do you know the scoop? Comment below or Send us a Tip