Some Shudder, Others Shrug at In-Your-Face Calorie Info 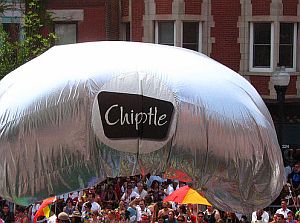 The New York State Restaurant Association is appealing a ruling by a U.S. District Court judge requiring NYC restaurants with 15 or more establishments nationwide to prominently display calorie information for all foods and beverages. But some establishments like Starbucks and Chipotle are already voluntarily complying with the new rule, and the Times sent out reporters to get some Man on the Street – or Man on the Feedbag – reactions.

Arend was eating under the impression that his Chipotle burrito, with the extras, had about 1,000 calories. Not so fast, insists skeptical blogger Midtown Lunch, who's blowing the whistle on Chipotle’s misleading calorie information. The company claims the calorie range for a burrito, depending on extras, is 420-918 calories. But the only way to stay on the low end is to eat a single flour tortilla (290 calories) with black beans (130 calories). Yum!

Even a vegetarian burrito sans cheese weighs in at 740 calories, and according to the Post, the Mexican Grilled Chicken Burrito is way over Chipotle’s high end of 918, topping off at 1,179 calories. So who to believe, the tabloid of record or the chain restaurant? Anyone seeking a third opinion may want to consult the Chipotle Fan website (yep, of course there is such a thing), which features a handy and disillusioning Nutrition Facts Calculator.

Photo of Chipotle Float at Gay Pride Parade by RcktManIL.