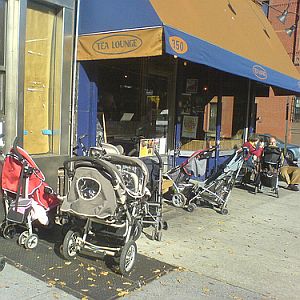 Brooklyn Paper has it that the smaller, funkier Tea Lounge in Park Slope, on Seventh Avenue and Tenth Street, is to close at the end of July. And you’ll never in a million years guess what the reason is! Turns out an obscene rent hike is forcing the neighborhood hang-out to move along and make room for, most likely, a Corcoran real estate office. Where have we heard this tune before?

And so the tumbleweeds of Park Slope’s Seventh Avenue ghost town drift further south. Opened in 2001, Tea Lounge initially signaled the neighborhood’s growing gentrification; now, like Saturn devouring his young, that insatiable gentrifying beast has come home to feed. Owner Greg Wolf tells the BP his landlord wants to double the rent: “At the price our landlord wants, we would have to sell a coffee to everyone in the borough every single day.”

It’s too bad, because with its funky, mismatched furniture, shameless Grateful Dead soundtrack and wide array of teas, the lounge was the only place in the area offering that communal, West Coast coffee house vibe. You just don’t get the same ambiance in a Duane Reade, but at least the bigger Tea Lounge on Union is still open… for now.