It's been almost two weeks since the deadly East Village explosion and businesses directly affected by the blast are in survival mode trying to get back on their feet. To help them out, conservationist blogger Jeremiah Moss and his initiative #SaveNYC are hosting a Small Biz Crawl for the mom-and-pop shops that survived the blast. The crawl will visit four East Village businesses that need some extra love to recoup losses and help with repairs, plus bring attention to businesses most in need.

Beginning at noon, the group will visit Gem Spa, the longtime magazine shop and egg cream destination that's been operating since 1957, followed by a trip to Himalayan Visions for some shopping. The group then has a choice to buy lunch at either vegetarian greasy spoon B&H Dairy or Paul's Da Burger Joint, both of which were just a few storefronts up from the explosion site. The crawl concludes with a stop at New Yorkers Market to stock up on groceries.

Many area businesses have been struggling to get back on their feet following the explosion, Some places like Pomme Frites were a total loss and will be forced start from scratch if they can get some help. Other spots, like Stage Restaurant and B&H have had an extremely tough go when gas was shut off following the incident. Luckily, ConEd has turned the gas back on at B&H, but owner Fawzy Abdelwahad will need heavy volume to make up for the weeks the eatery has been closed. 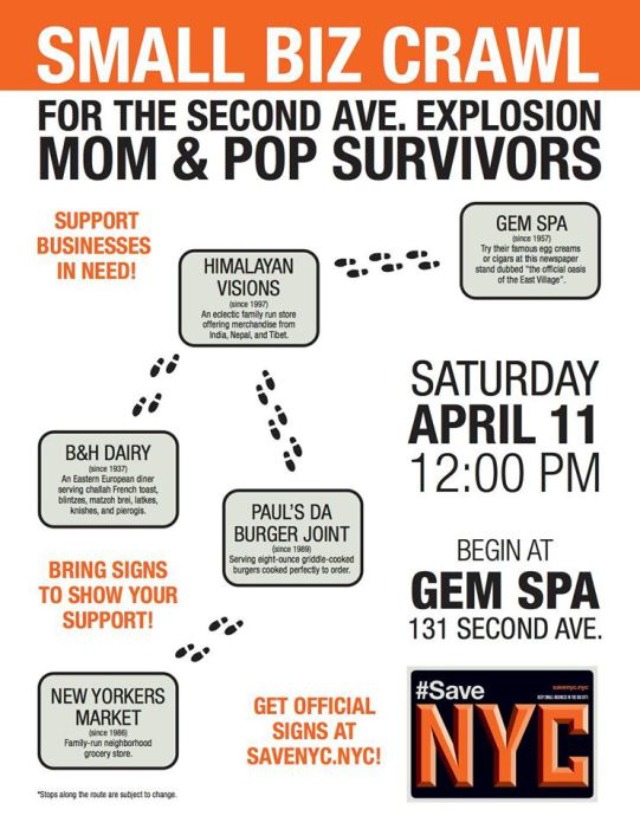