Six Restaurants For Eaters Who Like To Watch Hot Kitchen Action

America's fascination with watching chefs cook has reached a rolling boil—entire networks are devoted to food's entire journey from farm to kitchen to table to mouth-hole. (Thankfully, the coverage tends to stop there.) But here in NYC you don't need to sit in front of the boob tube to indulge your obsessive culinary voyeurism. Restaurants are all too eager to satisfy diners' craving for a kitchen floor show; here are five six where you can follow every sweaty move of some of the city's most talented chefs.

Aldea: Since opening in 2009, this acclaimed Portuguese/Mediterranean-influenced restaurant has boasted one of the best shows in town, with intense dinner theater unfolding nightly in chef George Mendes's immaculately open kitchen. The six seats at the Atelier-style chef's counter offer a full view into the quietly controlled, synchronized choreography of Aldea, where half a dozen tattooed cooks execute Mendes's menu with the intense focus of flavor samurai. Anything on the menu is up for grabs, but Mendes suggests you go with the $85, five-course tasting menu. In our experience, you can't go wrong with following his advice. 31 West 17th Street, (212) 675-7223

Hecho en Dumbo: This gourmet Mexican restaurant was forged in the fires of DUMBO, but is now across the river on the Bowery, where chef Danny Mena has been packing them in. The popular chef's table accepts reservations for two people max, and features a $55 course prix fixe menu, emphasizing fresh seafood and local meats "prepared in some of the most cherished traditions of Mexico." (No substitutions!) Hecho en Dumbo just switched over to its winter menu, and the new prix fixe includes a main course of Roasted Goat Kid placed on a bed of caramelized apples and carrots with fingerling potatoes. 354 Bowery, (212) 937-4245 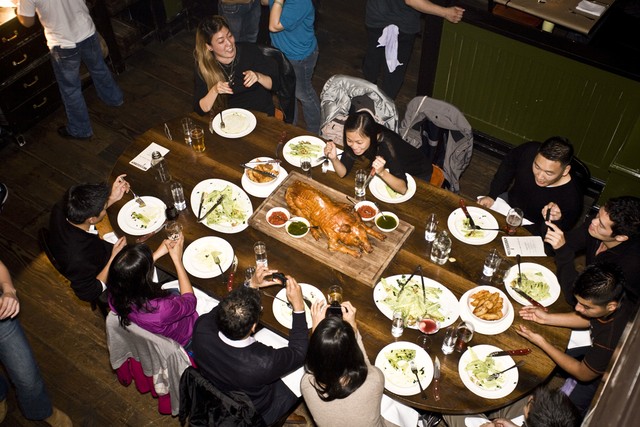 The Breslin: It's maddeningly difficult to have a meal at The Breslin—they don't take reservations and there's almost always a wait. But there's a way around that if you get a group of friends together. The chef's table, which affords a great view of the action in the open kitchen, is available for reservations of groups of 8-12, with three seatings nightly, at 5:30, 8 and 10:30. In addition to their whole suckling pig and lamb dinners, the meatastic Breslin is currently serving rib of beef and balsamic roasted duck dinners.

The meals are served family-style, and the duck is accompanied by Pot-roasted potatoes and Brussels sprouts with chestnuts. That one costs $65 per person, while the dry-aged prime rib of beef dinner rings up at $95 per person, and comes with Yorkshire pudding and creamed Swiss chard. And afterward, your party can recover from their food coma by relocating up to a room in The Ace Hotel! For reservations, email chefs.table@thebreslin.com 20 West 29th Street; (212) 679-2222

Brooklyn Fare: Obviously, no roundup of voyeuristic dining would be complete without mentioning Brooklyn Fare, the white hot downtown (Brooklyn) restaurant that consists exclusively of ringside seats. WATCH as chef Cesar Ramirez, a Bouley/Bar Blanc vet, meticulously weaves his critically-acclaimed culinary spells! TASTE the twenty small plate courses that flutter from his hands to your lips in a seemingly never-ending succession! PAY $225 starting January 1st, up from $185! But DON'T bring your own wine anymore—staring next month Brooklyn Fare will have a wine list and is no longer BYOB. And whatever you do, DON'T let Ramirez catch you taking notes about his food. 200 Schermerhorn Street, Brooklyn; (718) 243-0050

SD26: This reboot of the beloved upscale Italian restaurant San Domenico has a chef's table that fully embeds you in the heart of the action. A couple of small tables with high chairs are set up right between the pastry chef and line chefs, and can accommodate between two and eight gawking eaters. Chances are, the gregarious father-daughter team of Tony and Marisa May will be in the house to illuminate you on the finer points of Italian cuisine, and at the very least you'll be able to watch Executive Chef Matteo Bergamini and his team diligently slave away within arm's reach. The elegant six course experience costs $125-per-person. 19 East 26th Street, (212) 265-5959 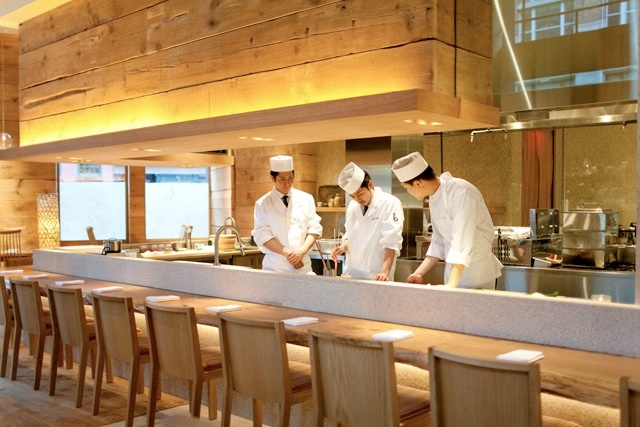 Brushstroke: One more! (For now.) David Bouley’s Brushstroke, an exceptional Japanese restaurant in Tribeca, should be on any serious kitchen voyeur's list. Though the seating arrangement may briefly evoke your standard sushi bar setup, at Brushstroke you're watching masters at work, assembling Chef Isao Yamada's inspired menu with artful precision. Yamada trained at Kyoto Kitcho, one of Japan's most revered kaiseki restaurants, and he's assembled a team of talented chefs from across Japan to experiment with a "vast" repertoire of dishes—we're told 10,000 have been developed. The 8-course ($85) and 10-course ($130) menus in the main dining room are constantly in flux.

While we're on the subject, Brushstroke is also doing a happy hour Monday through Friday from 5:30 p.m. to 8 p.m., in their serene lounge, which is decorated with floor-to-ceiling stacks of books with their pages, not the bindings, facing out. (It creates a unique, wave-like effect). The happy hour features a selection of discounted hot and cold sakes, and one unfiltered sake: Naraman Nigori - Junmai Fukushima ($9). Wine and beer, such as Kirin Ichiban Shibori Pilsner ($4), are also available, and you can choose from a selection of small plates such as the Lobster Claw Tempura ($8) and Guinea Hen Meatballs $5. 30 Hudson Street at Duane Street), (212) 791-3771

#aldea
#brooklyn fare
#chefs kitchen
#hecho en dumbo
#sd26
#the breslin
Do you know the scoop? Comment below or Send us a Tip