Sink Your Teeth Into A Juicy Drumstick, The Meat Hook's Tom Mylan Gives Us His Recipe

Recently the NY Times dedicated some space to the new star of Disneyland (and World): the massive turkey drumstick. Typically seen at Renaissance Fairs—and before that in Fred Flintstone's tightly-clenched fist—it has seen something of a, erm, renaissance. While you can score some year round at Williamsburg's Crazy Legs and Jacob's Pickles on the Upper West Side, you can also make them yourself at home. Maybe for game day? We turned to The Meat Hook's Tom Mylan for a recipe—they make them after every Thanksgiving with the legs from the turkeys that people don't pick up. He also shared some opinionated thoughts about the caveman pop... 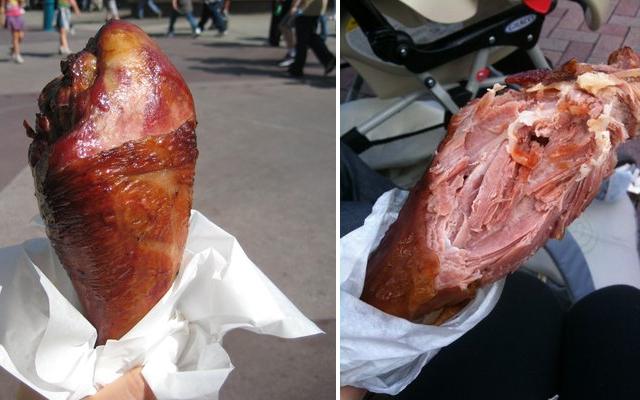 Disney's legs (people love to photograph themselves devouring them for Yelp)

I have no idea when the turkey leg became a Renaissance Faire standard but they've become as iconic to the genre as obese men wearing poorly made chain mail or busty wenches in pirate blouses and have now apparently taken over Disneyland/World. This begs the question: has the Happiest Place on Earth simply become an extremely boring gathering of the Juggalos? Or, has Huxleys Soma of the masses just been replaced by oversized meat on a stick? Anyway, here is our version of the Ren Faire classic. Mickey ears, bodices and/or Faygo are completely optional.

Start by combining the water, salt and sugar in a pot and bring to a boil. Remove from the heat and allow to cool and refrigerate until chilled.

Next, place the turkey legs (defrosted completely if frozen) in an extra large heavy duty zip top freezer bag and fill with brine. If any brine is left over you can use it to brine chicken or pork chops. Seal the bag and allow to brine for 48 hours.

Remove the legs from the brine and pat dry with paper towels. Place the legs in a smoker preheated to 160' and smoke for 6-8 hours. Fruit wood or hickory work well.

If you lack a smoker you can simply slow roast the turkey legs on a rack in the oven. Roast for 2-3 hours at 300 degrees.

#drumsticks
#recipe
#the meat hook
#tom mylan
#turkey legs
#original
Do you know the scoop? Comment below or Send us a Tip