In October, Whole Foods began demolition of the remaining deteriorating structures that were on its property in Gowanus, Brooklyn, where the chain plans to build a controversial new superstore. It's controversial in part because the site is adjacent to the Gowanus Canal, a Superfund site. But after a lengthy process, EPA inspectors determined that the Whole Foods had sufficiently cleaned the property, which was contaminated with dangerously high levels of benzene, a carcinogenic gasoline byproduct. All was proceeding according to plan... then Sandy struck.

The property, located on the site of a former Verizon fuel station on Third Street, was completely flooded during Hurricane Sandy. It hasn't been confirmed that the flooding was direct overflow from the Gowanus Canal, which did overflow its banks in places, but the storm's impact has raised questions about the site's ability to withstand storms. One local resident, Martin Bisi, sent us these photos—the one below shows the property "like a lake" on the evening of November 4th, days after the hurricane's surge. 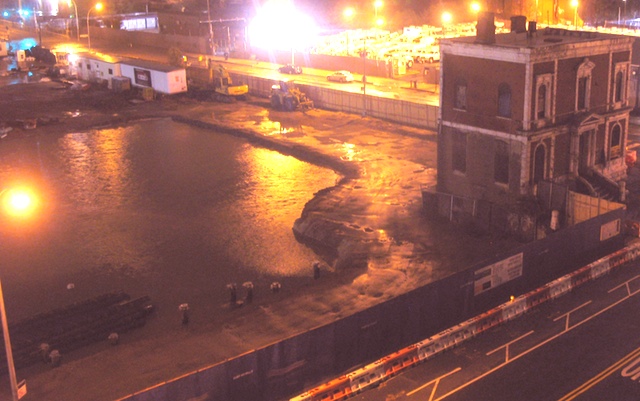 Earlier this week Bisi visited the site again and noticed what he describes as "a newly installed storm drain, right in the area where the toxic waste is "capped,' according to sign. I went to a EPA/DEC meeting, and that's what was said: the waste is 'capped' by fresh soil." The DEC regional director, Venetia Lannon, told Bisi she'd look into the question about "what effects that much water potentially seeping into the ground there might have." We've also reached out to the DEC on the matter, and we'll update when we have more information. In the meantime, construction at the site continues....

Whole Foods' press representative has not yet responded to a request for comment.

#brooklyn
#Gowanus
#Whole Foods
#original
Do you know the scoop? Comment below or Send us a Tip