Heaven, is that you? (Getty)

Imagine a New York City without sidewalk dining. Imagine Paris without bistro tables lining its sidewalks. Imagine having to eat every meal, drink every glass of wine, down every cup of coffee... in an enclosed restaurant space. It sounds like some kind of post-apocalyptic society—everyone kept away from the streets, in a confined space, like a pig in a cage.

My colleague Nell Casey took down sidewalk seating in an editorial today titled: Sidewalk Seating Is Stupid. A #hottake that I strongly disagree with. Sidewalk seating is awesome. Even better than a backyard, which in the city can often feel more like an al fresco sauna if you're packed in there with dozens of others, which you will be. Always.

Nell lists off what she believes to be the negatives associated with sidewalk seating: the noise, the detritus, the ogling, the dog pee, and the congestion. I would like to point out that many of these things exist indoors, as well. Inside you sit at cramped tables, knocking into neighbors, trapped with rats and/or roaches, staring at the meal on the table next to you, straining to hear your dining companion in the echo chamber you sit in.

And you think that floor is any cleaner than the sidewalk? At least on the sidewalk you are FREE. Stretch out a little, breath in some of that immunity-building city air, pet a canine passerby, soak up some vitamin D, you are really L-I-V-I-N' out there, my friend. Those suckers inside might as well be in a basement if they're not gonna join you out on the streets. Maybe there's even an umbrella over your table, adding some backyard suburban charm to this cosmopolitan scene.

Another thing Nanny State Nell takes issue with here is that sidewalk seating is a "hazard... a downright nuisance." When is the last time you tripped over a human enjoying some eggs outdoors? And maybe their ability to bring a bottleneck situation to the sidewalk is just what we all need to slow us down a little, man, you know, take it easy. What's the rush... got a reservation at a dimly lit 200-square-foot cube with a cramped seating situation? Unwindulax. 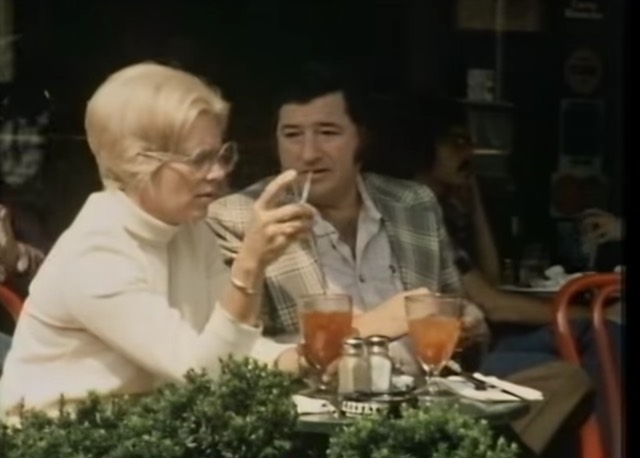 Sidewalk seating creates a sense of community on our streets. It's a transformative part of our streetscapes. It's romantic. It offers some outdoor time with your meal. It's like having your own little front porch. It's picturesque. It's one of the city's greatest offerings. It's also beneficial to business owners—if a restaurant can get a sidewalk cafe license, "the payoff can be big," the WSJ noted in 2014—one restaurant "nearly doubled its capacity, to 98 seats from 55—leading to a 25% increase in the number of diners after one weekend." Why does Nell hate jobs and the economy? You'd have to ask her.

In conclusion: sidewalk seating for everyone! But especially for New Yorkers, we need it most.