Shrinking Sidewalks Slow to a Crawl 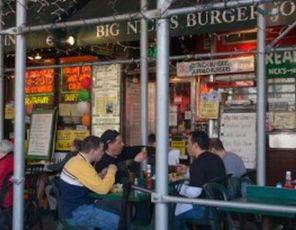 Trying to walk in certain city neighborhoods is fast becoming an extreme sport. Between the new, bigger newsstands and bus shelters, the perpetually metastasizing newspaper boxes on every corner, the increasing popularity of alfresco dining, the delivery guys on their bikes and – let’s not forget – tourists, wending your way down the sidewalk without reaching for your Taser demands a degree of patience not often found in your average New Yorker.

A month after the Times’s chief restaurant critic bemoaned the city’s sidewalk dining experience, today’s Times real estate section tucks into the economics of the trend, which has seen the number of outdoor café licenses spike 25% in the past four years. It’s been big business for the city, which raised the rate on “consent fees” – what New York charges businesses that lease public real estate – and has raked in $10.7 million from the sidewalk tables so far this year. Restaurants between 96th Street and Canal cough up about $31 a square foot on the sidewalk, on top of $510 for a two-year license.

And since the city is starting to allow gas heaters for outdoor cafes, the alfresco fever isn’t going to break any time soon. After all, it costs a lot less to add tables outside than it does to expand a restaurant’s interior. But where does this leave the poor pedestrian struggling to navigate an ever-narrowing tightrope of sidewalk? Paul Steely White, the executive director of Transportation Alternatives, has a solution that may interest drivers desperate for parking: the city should get rid of some parking spaces, “its most undervalued real estate, costing just $1.50 an hour, and put sidewalks in their place.” Any motorists care to comment?

Photo of Big Nick's from Cresny.