Should You Ride The Starbucks Unicorn Frappuccino Up Sugar High Mountain?

It's day one of Starbucks' foray into Instagram trends, and did you think we'd let this meticulously edited PR shot of the Unicorn Frappuccino stand for itself? Of course not, which is how I found myself at one of the thousands of Midtown Starbucks this morning before I even had a chance to finish my cup of ugly non-unicorn coffee.

I'll admit the drink is quite pretty, and I drew multiple stares from the tourists crammed into the Starbucks on 7th and 55th Street. It's more purple than the magenta press photo, but an employee had dutifully zigzagged the "sour blue drizzle," and the whipped cream was heavily, if unevenly, doused in multicolored dust, which I assume is made from dried up unicorn tears. Get all the photos taken within the first minute or two, though, because once the properties begin to decompose you're left with gloopy layers of cream and separated milk product with bright pinkish liquid pooled at the bottom. 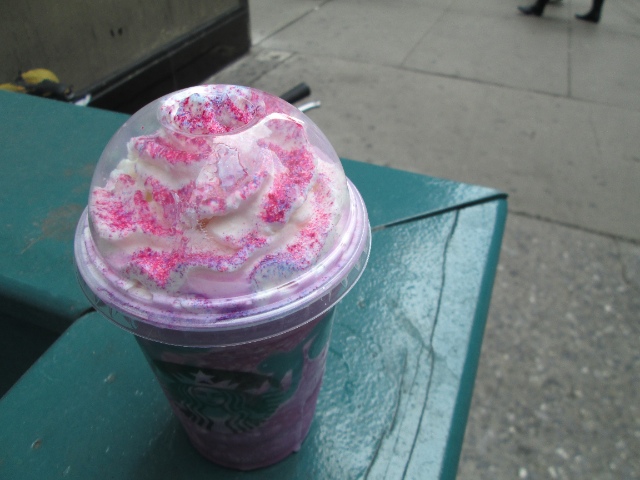 I haven't had a Starbucks Frappuccino since crop tops and chokers were in style—the first time—so I can't speak to the base sweetness level but, unsurprisingly, the Unicorn Frapp will test the productivity of your pancreas. Starbucks describes the flavor as "sweet and fruity...[evolving] to tangy and tart." Maybe I didn't sip long enough to get to the tart part, because it's pretty uniformly sugar rush. Gothamist staffer Dave Colon described the taste as "melted Italian ice," perhaps picking up on the mango flavor that was indeed evident.

So should you order the Unicorn Frappuccino? Well, there's no coffee in it, so that's a point off. But if you're a regular drinker of Starbucks Frapps or Dunkin Donuts Coolattas (RIP) sure, strap a saddle on that unicorn and ride, baby, ride! The rest of us should just do what everyone else will do: order it, make an Instagram, then sic the leftovers on your co-workers.

Update 1:50 p.m. Just asked Rebecca Fishbein if she'd be mad if I vomited on her desk.

#unicornfrappuccino:
"Now, that unicorns
are everywhere I
feel like they've lost
their verve. Like they
were special, now
everyone has one"

#review
#starbucks
#unicorn Frappuccino
#original
Do you know the scoop? Comment below or Send us a Tip