Once upon a time we found ourselves in unfamiliar territory: a sports bar. The lure of Eddie Vedder's voice singing his part in Temple of the Dog's "Hunger Strike," and the promise of an outdoor patio, were all the sirens we needed. Once inside Mulholland's we were pleasantly surprised to find the friendliest staff this side of the Williamsburg Bridge, and on top of that: reasonably priced drinks (and food served til late in the night). All that said, we highly recommend checking it out yourself, even the skinny-jeaned amongst you... just so long as you aren't an idiot (per their Law).

Co-owner Shawn Mulholland recently took some time to tell us about his favorite Scottish customer, his ties to NYC, and how running a sports bar in Hipsterburg isn't as difficult as one may think.

What's it like having a sports bar in the middle of the hipster mecca Williamsburg? It's fun, hipsters like sports too—but it's a good mix—hipsters/no hipsters it's always a good time, it's kinda hard to not have fun where everyone is getting drunk.

Do you tend to get more Yankees or more Mets fans? More Yankees, but I think that's because they're in 1st.

Which New Yorker do you most admire? When I think of New Yorkers I think of my Dad, I think of someone who has lived here his whole life, and who knows why it's the best city on earth. My father was born in the Bronx, the schools were so bad when he was growing up that he had to get a job to put himself into private school.

My father knows every little crevice of this amazing city, and the history behind it. He eats dirty water dawgs, he goes to Yankees games, he works on Wall Street. He worked in the Financial District during 9/11. My father is NYC. He's humble, straight forward and if you don't respect him, you will find yourself catching a beating... just like the city that I love. 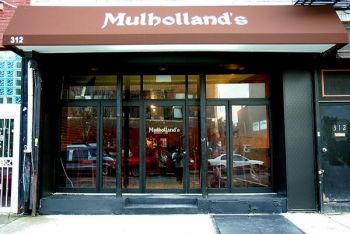 Do you have any particularly interesting customer stories? All customers are interesting, all customers have a story, but the newest one came around the NBA playoffs. It was game 4 or 5 and we were crowded. Lakers fans came out of nowhere and packed the place out. Well after the game there were a few locals and some fans still enjoying their win when a very tall skinny man walked in with a thick Scottish accent.

Now for me to say tall he has to be big, I am 6'4. He wanted a Stella, which he was promptly served... however once he was told the price, he could not come up with the funds. He had 10 pounds and a credit card, so the bartender said, "Don't worry about it. Have fun on us," and the customer responded with shock! "No," he said, "You're taking a piss." The bartender said, "It's all good, welcome to Brooklyn." Remember, Brooklyn can be a very friendly place if you don't act like an asshole.

Well the customer at this point, obviously drunk, finishes his drink and demands a new one. And this time he addresses the bartender by calling him a "big fat fag." The bartender, without blinking an eye lash, goes to the back and briefs me of the situation. I walk over and tell him "You had fun with us and its time for you to go."

The customer is now apologizing and basically begging for a drink, he gives me his credit card and asks me to run the card for 20 dollars so he can have a few more and even buy me a beer. I accept and begin to pour his Stella, during which he lashes out again. The crowd's response was like a bad call during the game. I walk over, with out any drinks and explain that this is Brooklyn, not Scotland, and while they may make them pretty tough over there, you're still not at home. The customer apologized again, and I served him his drink. I drank mine, and hhe passed out.

So now I have to wake him.. It's about 11:30 so there's no real danger of anything horrible happening to him. Me and another customer pick him up and sit him down on the bench in the rain. And yell at him to wake up, and he wakes right up, then takes a swing at me and falls to the ground. After he realizes we weren't trying to hurt him he gave us his address, and we called him a cab.

I would love to say that's the end of the story, but at 4:45 a.m. me and some other staff members were walking out, and who strolls around the corner at a very fast pace but Mr. 6'6". We all laugh and go home. The next day I opened the bar at 2 p.m, was nursing a hangover drinking tea and reading the paper and I shit you not he walks in. I of course still had his name logged in my head from the night before, so I greet him by stating his whole name. This throws him for a loop. He had no clue. So I explained and now Mulholland's has a customer for life.

Please share your strangest "only in New York" story. Not at Mulholland's, but at another bar. It was packed, I mean you couldn't move at all, and a female customer took a shit... while standing at the bar. True story!

Given the opportunity, how would you change New York? I would bring back the mob, all new building being constructed would have to have a lot more ornaments and decoration. For god sakes the new glass buildings that are flying up look more like Miami than Gotham. Where is the charm that made artists from all over the world flock to? I would bring the artists back to NYC.

Under what circumstance have you thought about leaving New York? I have flirted with the idea of moving to Europe, slowing my life down to a speed that I can soak it up. Relish in it. But home will always be NYC.

Do you have a favorite New York celebrity sighting or encounter? Lots and lots! But real New Yorkers don't care about celebrities, which is why they come here, we are too busy. But stop by the bar and I will tell you a great one about A-Rod and Jeter... before A-Rod played for New York.

Best cheap eat in the city. 88 East Broadway. $5.75 hand pulled noodles, HAND PULLED! And if you stroll around the block you may find a dumpling shop that sells 5 dumplings for 1 dollar. That's not a misprint. 1 dollar.

Best venue to hear music. In your house on a Sunday when it's raining and while getting drunk.