The Shake Shack Sheeple flocked to Madison Square Park today to welcome the next iteration of Shake Shack's original flagship location. The chain reopened the location this morning following seven months of construction, during which the city had literally no other way to procure Shake Shack. So naturally, there was a line.

People were lining up as early as 9:30 a.m. to get their hands on the first burgers off of the griddle. In addition to the regular lineup, the spot was offering a special ParkBurger with cave-aged Jasper Hill Farm raw cow's milk cheese sauce and Niman Ranch applewood smoked bacon, which photographer Clay Williams reports is delicious. "Gooey cheese and smokey bacon and a great smashed patty. So good." 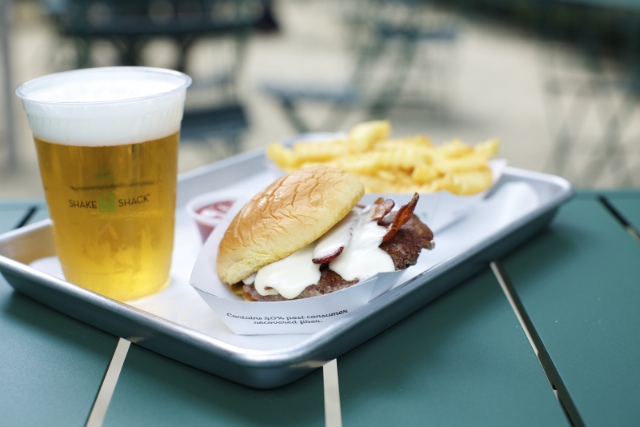 Besides streamlining this location to better match the rest of the fleet, not much has changed about MSQP SS 2.0. The Shack got a remodel during its downtime, which included demolishing all but the skeleton and refurbishing the entire structure.

Danny Meyer and other Shack bigwigs were there for the big ribbon cutting ceremony, naturally. After which they all decamped to swim in their money pits.

#lines
#madison square park
#shake shack
#sheeple
#original
Do you know the scoop? Comment below or Send us a Tip