Has there ever been a better time for eating pastries in this town? Joining our already embarrassingly rich selection of stand-alone bakeries, both homegrown and from around the world (Korean, French, Italian, Chinese, Scandinavian, West Indian, Jewish, Ecuadorian, Greek...), in these past few months we've seen the opening of several stellar new spots. These include Bourke Street from Australia, Ole and Steen from Denmark, and the Israeli Michaeli, from the former Breads chef. Vegan and gluten-free options are also ever more readily available.

Even if you've already been to *all* the bakeries, there's at least one more that's an absolute must, and it just opened last week in the Meatpacking District: Fabrique from Sweden. Owned and operated by executive chef Charlotta and David Zetterstrom, Fabrique is a big deal in Stockholm and London, with 24 shops total, but this is the couple's first foray into this country. There is little chance it will be their last.

The baked goods at Fabique are phenomenal. Start with the Cinnamon and Cardamon Rolls, both of which are exceptionally moist and exploding with flavor. Same for the Brownies, which look like nothing special, all cut into slim rectangles and studded with almonds, but are not only as gooey as your wildest brownie dreams come true, they also pack a pleasant cocoa punch and a bright, fruity tang. All of these instantly quality for Best In NYC consideration.

For a more Swedish-sounding treat, get a couple of dense Cokladbolls, a cake-y chocolate and oat concoction covered in coconut. The Vegan Chocolate cookie, made with coconut oil, is as deeply satisfying as anything else on the well-stocked shelves. There are extra-buttery Croissants and Pains au Chocolat, chewy Cranberry Nut Bars, and loaves of Fabrique's signature sourdough bread—either plain, or with rye, or walnuts, or apricots—to keep the party going back home.

The bread and croissants are also used for a variety of ham and/or cheese sandwiches. And if for some reason you're opting for bread-free today, there are yogurt jars with chia seeds, oats, and cherries soaked in honey. Various coffee drinks, using beans from Brooklyn Roasting, can be enjoyed to stay or to go.

Much of the long, narrowish space at Fabrique is taken up by a big open kitchen in the back, the better to make the whole place smell like heaven, but there is seating for about 20 at a row of tables just past the crowded ordering counter up front. Everyone on staff here is exactly as you would want bakery workers to be: warm, inviting, and passionate and knowledgeable about baked goods. Such a great addition to the neighborhood, and to the city. 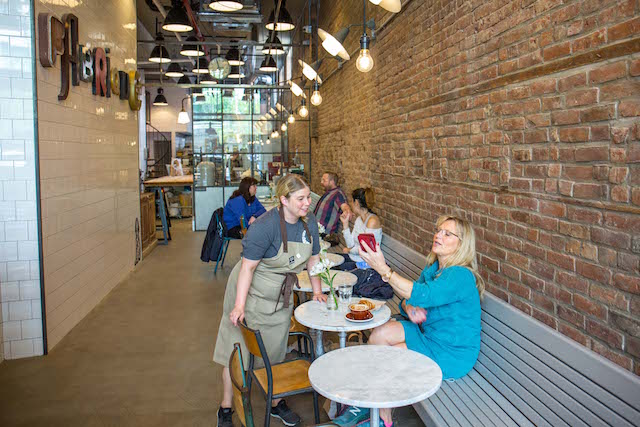