Sausage staple Schaller & Weber is one of the last remaining vestiges of Yorkville's once thriving Germantown, counting itself among the ranks with neighboring Heidelberg. While a changing demographic hasn't yet ousted these cultural landmarks, the Second Avenue Subway construction certainly isn't helping business, with large fencing and construction materials all but obscuring the duo from view. Nevertheless, the wurst purveyors have taken the moment to expand on their brand, opening a little outpost, Schaller's Stube, vending tasty sausage sandwiches right onto the street.

The nearly 80-year-old sausage and charcuterie makers aren't abandoning their roots entirely, but their specialty sandwiches aren't solely relying on German styles and toppings either. The Saigon Special ($8) tops a smokey baurenwurst with a daikon-carrot slaw, cucumber, fresh jalapeno, cilantro and a sriracha aioli for a banh mi-style sandwich, while the Donner KeBrat tops bratwurst with Turkish salad, frisee, cumin, thazaki sauce and sriracha, all wrapped in a grilled pita. 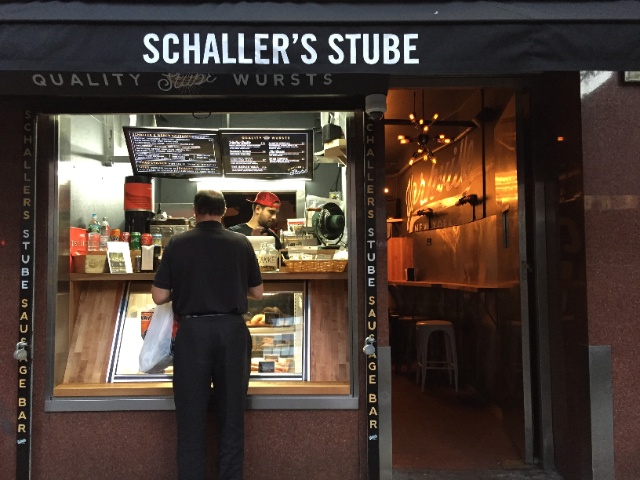 But the classics are well worth braving the construction-muddled sidewalk outside the tiny shop, which offers a few stools upon which to perch and eat behind the street-facing counter. Their literal Classic ($7) keeps it simple with bratwurst, their special Dusseldorf mustard and saukraut. The sausage is rich and flavorful, with a thin but snappy casing around succulent pork and veal mixture. There's also the option to make your own, which resulted in the sandwich pictured below. I'm a sucker for a spicy cheddar brat—though the casing on their version was a little chewy for my taste—which I topped with mayo, fresh sliced jalapenos and some super crunchy bacon.

It must be noted that the bread they're using (a brioche-style bun from Balthazar) really seals the deal on these sandwiches. Where most wurst sandwiches employ a bulky, bready roll, the crispy, buttery and thinner bread allows the wurst and toppings to do the talking; you won't be left with a big hunk of bread when you're finished, a common side effect to most other sausage iterations found elsewhere.

Sausages aren't the only things on the menu—though any self-respecting carnivore would be foolish to miss out on them. They're also doing a version of fried chicken, with a juicy thigh only setting you back $3. Soft pretzels ($1.50) are good for a quick snack but sadly the Potato Salad ($3) was a little on the dull side, lacking any discernible punch from onions or mustard, as befits most German potato salads.

#new restaurant and bar radar
#sausages
#Schaller & Weber
#Schaller's Stube
#ues
#upper east side
#original
Do you know the scoop? Comment below or Send us a Tip