Sea Beans: Much More than a Weird, Random Vegetable 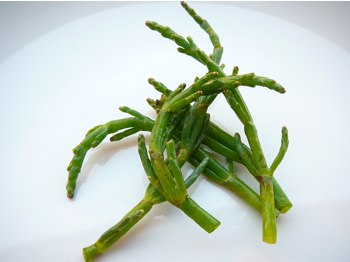 Languishing in cardboard boxes near the mushroom sections in local Fairway stores these next few weeks are Sea Beans, mysterious short stalks of a dark green vegetable, looking like something you might find washed up on the beach, but maybe a bit more edible. According to Elizabeth Schneider’s Vegetables from Amaranth to Zucchini, Sea Beans (aka Salicornia) grow wild in warmer months all over- in North America, Europe, Asia, and Australia. “Salicornia is not seaweed, as it is often described,” she writes, “nor is it a cactus, which it slightly resembles.” Eaten raw or cooked, its flavor can best be described as sea salty intense, with a sort of grassy asparagus aftertaste. When fresh, Sea Beans are crunchy like snap peas. At the tail end of their one-week refrigerator shelf life, older sea beans can be revived with a five-minute soak in ice water. In addition to their current availability at Fairway (a pricey $8.99 per ½ pound), farm-raised boxes of the vegetable show up every June at NY greenmarkets, often leaving perplexed customers headed for more conventional items like pretty garlic scapes, or local strawberries.

Uses and suggestions: At Del Posto and Le Bernadin, Sea Beans are used primarily in summer salads; tiny stalks of the vegetable had a brush with mainstream success in the season 2 finale of Top Chef. Epicurious has a recipe for Black Cod, Sea Beans, and Oysters, based on a dish seen in the original version of the upcoming Catherine Zeta Jones-gastronomic love-fest film No Reservations. Fancy, and cinematic. However, when you're ready to commit to this whole Sea Beans thing, we propose that you go the TGI Friday’s appetizer menu route, using the tempura batter portion of this recipe. Yes, fried Sea Beans. Instead of green and yellow wax beans, substitute Salicornia. Because of the vegetable’s high sodium content, it might be best here to stay away from soy-based dipping sauces. We suggest an easy mignonette sauce for tempura fried Sea Beans, made from four ingredients: diced shallot, black pepper, Japanese plum vinegar, and a few shredded shiso leaves (or basil if you want). It’s kind of like salt and vinegar chips, without the potatoes. Please, for the love of food, give this vegetable a chance.