Score These Hearty Russian Dumplings Right Off The Street

Dumplings come in all forms, like ones filled with soup or potatoes or even vegan cheeseburgers, hailing from Tibet, Vietnam, China, Latin America, Eastern Europe (and beyond). It's to that last region of the world we visit again to talk about Anton's Dumplings, a food cart that's been cooking up steaming plates of Russian dumplings called pelmeni since the beginning of the year. Inside the cart is Anton Yelyashkevich, a native of Belarus who moved to Brooklyn as a child.

The pelmeni ($6 for a small, $11 for a large) are stuffed with meaty options like the Siberian, with beef and pork, or chicken; there's also a vegetarian offering made with potato. "A lot of people don't understand the concept of a Russian dumpling," partner Alex Shklyar explains. "We get a lot of 'is it like a pierogi?' every day." So there's no confusion, the truck offers free samples of their dumplings. "It also gets a lot of people talking to us which gives us a chance to show we're a fun company that enjoys talking to the people and not just another food cart."

The most popular and most traditional topping is sour cream and a scattering of scallions, both of which are offered free with an order of dumplings like you'd find in Brighton Beach. Also free: less traditional toppers like soy sauce and sriracha. "We also offer the teriyaki sauce as a special," Shklyar says. "That is a slight bastardization of the original cuisine, but it's my favorite combination." 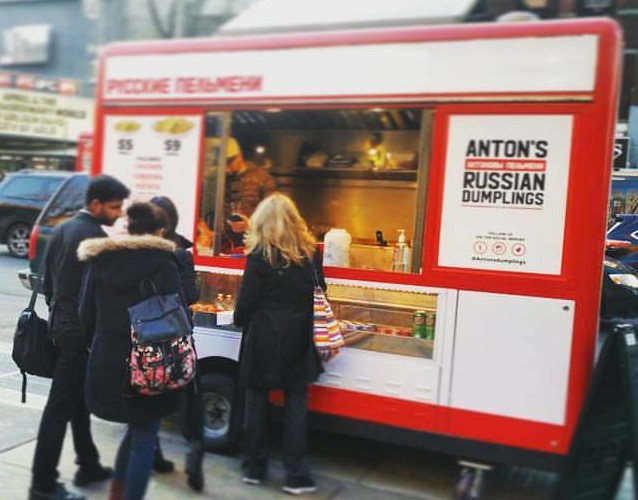 The only paid topping is a dousing of Smoked Gouda Fondue for an extra $1. The Times calls it a "strange nexus of nachos and gnocchi." "Anton and our head chef, Ele, were mad scientists in the testing process," Shklyar reveals. "We've finagled with a ton of combinations and have seen winners and losers."

One proven winner: the "Drunk Russian" creation they offer on Saturday nights. "We basically throw together the hangover essentials like a fried egg and sauteed onions/mushrooms on top of your choice of dumplings." Look for a chimichurri special in the works soon.

#anton's dumplings
#dumplings
#food trucks
#pelmeni
#russian dumplings
#original
Do you know the scoop? Comment below or Send us a Tip