Score Free Jianbing Saturday At The Opening Of Mr. Bing In The East Village

The pop-up location of Mr. Bing opens in the East Village on Saturday and there'll be some free grub if you're awake before noon. The first 100 customers through the door at the St. Marks Place shop will receive one free bing to kick off their weekend. The shop opens at 11 a.m.

Slurp down Long Island oysters and toss back some liquor at the Outside The Shell event at Pier A Harbor House in the Financial District on Saturday afternoon. The bivalves are all sourced from the East End of Long Island—think Montauk Pearls and Blue Island oysters—with pours of cocktails, spirits, beers and more from the bar at Pier A plus Barrier Brewing Co, Flagship Brewing Co, Proud Pear and Hiro Sake. The event runs from 2 p.m. to 6:30 p.m.; tickets $79. 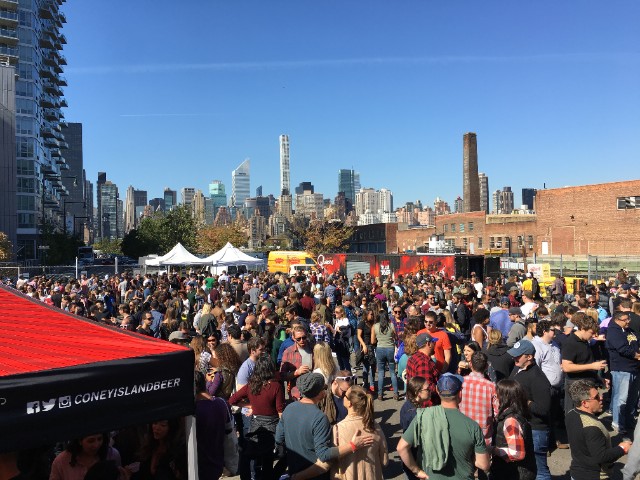 A two day beer festival unfolds at the LIC Flea & Food on Saturday and Sunday, with about 25 beer purveyors expected to be in attendance pouring a few selections from their lineups. The Queens Beer Festival offers unlimited pours from Coney Island Brewery, The Bronx Brewery, Rockaway Brewing Company, Braven Brewery and Great South Bay Brewery, among others. There are several sessions each day and various ticketing levels, but generally prices are between $29 and $126.

Calling all vinegar enthusiasts to Orchard Street on the Lower East Side on Sunday for the annual Pickle Day festivities, touted as the largest pickle festival in the world. Over 50 food purveyors will be participating this year in both savory and sweet categories at the outdoor event, which takes place between Houston and Delancey Streets from noon til 5 p.m. In addition to NYC restaurants and shops—Pickle Guys, Brooklyn Brine, Saxelby Cheesemongers, Char Sue and tres leches with pickled pineapple from Sugar Sweet Sunshine Bakery included—there's going to be a home pickling contest, activities like giant games and bubbles, and two different DJ booths along the route.

If you think orange wines contain actual oranges, perhaps you'd do well to head to Roberta's in Bushwick on Sunday, where they'll be exposing customers to the unique wines with an Orange Wine Fest. From noon until 7 p.m., the garden at Roberta's will be home to over 30 different types of orange wines that will be explained and poured by bartenders Rachel Garis and Jason Etheredge. The restaurant will also be roasting up a whole pig and serving their regular menu of pizzas and other dishes. Wines will be poured starting at $4 for half a glass.