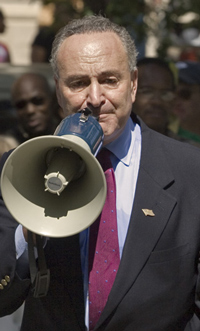 Sen. Chuck Schumer appeared in Red Hook yesterday to support the plight of the vendors that serve the people who come to watch and play sports at the Red Hook ballfields. The vendors have been cooking up ethnic food that appeals to their mostly Hispanic clientele for several years under a series of temporary permits from the city. The Parks Dept. wants to put an official vending permit up for bidding, and the current vendors who sell relatively low-priced food to their customers are not assured of winning the contest over a business catering to newer and more well-heeled Red Hook residents.

This is not strictly a class issue. Top Chef overseer Tom Colicchio and other esteemed chefs and food journalism personalities have lobbied in support of the current Latino vendors. Sen. Schumer showed his support yesterday, eating a goat taco and barbecued corn, before comparing the vendors to the trees of Brooklyn, that provide the shade and substance to their community. A Parks Dept. spokesman stated that the open bidding was simply an effort to comply with department regulations.

We hope that Sen. Schumer's appearance will add some weight to the cause of Bay St. vendors. It's also a demonstration of the continued power of the immigrant vote in NYC and NY State. Grandstanding in favor of recent immigrants in hopes of their future votes is a New York tradition dating back centuries.