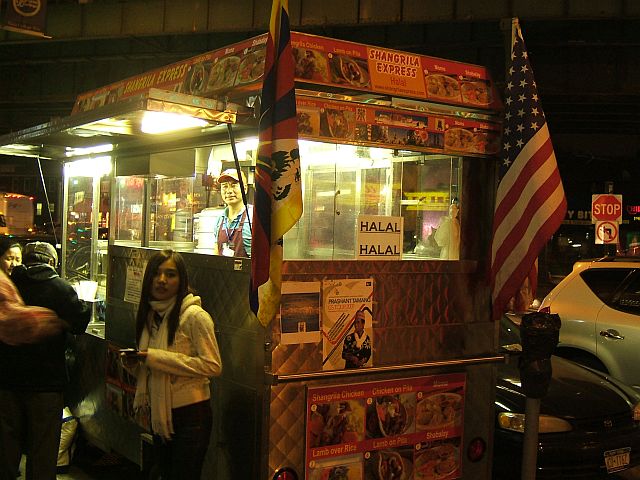 Yet another culinary transfer point has been added to the many ethnic eateries radiating outwards from the 74 Street/Broadway subway stop in Jackson Heights: Shangrila Express.

Yesterday when Gothamist learned that the city's first and only Tibetan food cart had opened near the renowned Sammy’s Halal we couldn’t wait to try it. We approached the cart next to Sammy’s and ordered some momos only to be told they only serve chicken over rice. Upon closer examination, we noticed there was no sign anywhere reading Shangrila Express. Clearly this was the wrong place. After an hourlong trek from Rego Park to Jackson Heights we were hungry and decided locating this Tibetan cart would prove as difficult as scouring the Himalayas for its mythical namesake. So we set off to find some grub along 74 Street, but none of the restaurants struck our fancy. Just as we were about to call it quits and head to Roosevelt Ave. for some tacos, there it was. The American and Tibetan flags were proudly flying and there was a line of kids ordering up momos, the dumplings that are the hamburgers of the Himalayas. 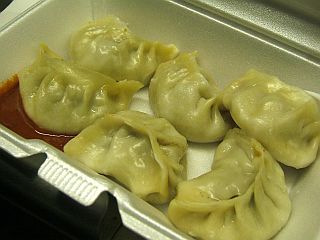 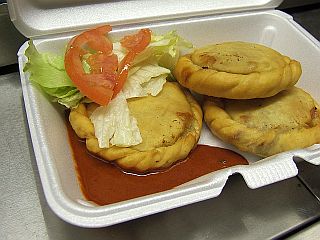 Until last night, momos have proved underwhelming, all too often leaden and thick, leaving us wondering what all the hoopla is about. After eating Shangrila's juicy beef dumplings shot through with bits of green onion and cilantro we began to understand momo mania. The delicate-skinned crescents came with a pool of sepen, a reddish hot sauce singing with roasted chili peppers and ginger. Weser Dorjee and his nephew, Namgyal Ghongpa, make all the food fresh, and it shows. The cart is open from 4 p.m. to 10 p.m. On a good night, the pair goes through 1,000 dumplings. Gothamist also tried the shabalay, deep-fried disks packed with beef that Namgyal has dubbed Tibetan beef patties. These were so good that we may soon find ourselves returning to taste the duo's take on chicken and rice: Shangrila Chicken.

The pair opened the cart Oct. 11 to coincide with the Dalai Lama's visit to New York City. Scarcely a week later they closed the business to go see him receive the Congressional Gold Medal. When Gothamist noticed photos of the Dalai Lama and W. inside the cart Namgyal said with a smile, "I wish I could serve the Dalai Lama, but not yet."