by John Del Signore
Ten years ago Saul Bolton and his wife Lisa opened Saul on Smith Street in Brooklyn’s Boerum Hill. At the time, the location probably seemed a little too remote for fine dining, but the restaurant has since become a favorite of locals, epicureans from other boroughs, and—since becoming one of only three restaurants in Brooklyn to receive a precious Michelin star—a destination for European tourists. Bolton spent his early years in the kitchens of David Bouley and Eric Ripert, and the meticulousness of his seasonal menu reflects those experiences.

At Saul, the sausage, pasta, chocolates, and ice cream are prepared in-house, and Bolton has been sourcing his other ingredients from local farms since long before it was de rigueur. At $40, the four course prix fixe is definitely one the best deals in town, and for a restaurant with a fancy Michelin star, the atmosphere is refreshingly unfussy, with The Who on the stereo, an old-timer reading Racing Form in the corner, and a waiter with dreadlocks mixing drinks behind the bar. Peruse the full menu here.

How has the dining scene in your neighborhood changed since you opened? When we opened there were maybe four restaurants but now there are at least 30 or 40. So it's really changed in that sense, the sheer numbers. I think when we first opened there were more chef/owner-driven places that opened like Patois. As time passes, most of them are business concepts instead of being driven by chefs wanting to express themselves, for lack of a better word, within the craft area. And that's not everybody; there are newer places on Smith who have the kind of love that I mentioned. The guys at places like the JakeWalk are really immersed in what they do and they're a good restaurant. But there's more of what you find now are cookie-cutter Japanese restaurants that are inexpensive and impersonal. They're there to make money, not to say that we aren't, but it's a different effort.

Saul seems like labor of love. You operate the restaurant with your wife, correct? Right. A lot of the staff have been here forever. Both kitchen and front of the house. Two of the front guys have been here for six years. That's unheard of in the business. Very rare.

Has it been a challenge to be married to someone you also have to work with all the time? Man, put yourself my shoes. Imagine! It's a total challenge. It's just hard. Hard not to bring home to work and vice versa, but I we've done a fairly good job. We haven't exposed people to our inner workings and we have kids so we do our best not to be bring it home. It's a little suffocating at times. It's difficult, but we do it.

What attracted you to the location on Smith Street to begin with? We had looked everywhere for about a year and a half. Manhattan, Park Slope, and all the other places that seemed cool were too much to build out. For example, a place here on Atlantic was completely encased in asbestos. A lot had to do with capital. It just so happened that while we were out running errands we saw that this place was for sale, a block away from where we lived. It was formerly a soup place during the soup craze, Soup Nazi thing. These guys who were selling it were a little shady and had a little gambling operation downstairs. We bought it at a decent price with an option to buy the building. Now we took it over and the rent was extremely cheap. After five years we bought the building for a price that was set well before the purchase, when the neighborhood was still undesirable. So it was a lucky thing. 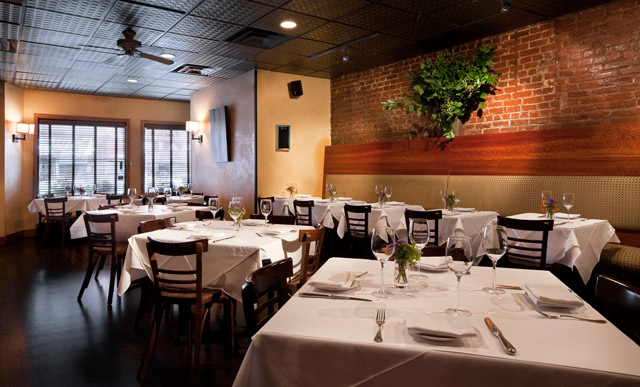 Getting a Michelin star is a very big deal. Did you have any idea that was going to happen and how did that impact the restaurant? It definitely impacted it. After we got the star we saw a 25% increase in sales. I knew something was going on when they came to interview me. They asked for a list of purveyors and a tour of the place. To me it's exciting. I've kept up with what was happening on the other side of the Atlantic with the romanticism of the Michelin star in the chef's world. Maybe it's just me being idealistic because with any review you have to take with a huge grain of salt because it's very subjective. But it's a cool thing; it still means something to me. The media has been knocking it around since they came over, too. It feeds my romantic idea from when I was a young cook trying to be a chef and dreaming of moving to France to open a restaurant, getting a Michelin star, living above the restaurant, having your own sheep and pigs—so this is as close as I get.

How have you been coping with the economic downturn? Floating along. Business is definitely down but it's not intolerable. Hopefully the economy won't get substantially worse in the fall. It doesn't seem to be. I feel like New York City is a bubble relative to the rest of America. Overall, it has helped the business run more efficiently. I think a lot of people would say that. It was like an alarm bell that went off and everyone wondering how to get leaner and meaner and streamline the business while maintaining quality, if not improving But it's not the ideal situation and I would rather not be in it. We should have seen it coming for the longest time and prepared for it, but I guess that's impossible. Still floating along though.

If you would pick one entree from the menu to recommend to give someone a sense of the restaurant someone, what would it be? I think the codfish right now represents the restaurant in terms of what we're trying to do, and is a composite of our respect for technique that's been used for forever and modern presentation. I really love it. Beautiful dish. Visually, it's striking. Texturally, we have a lot going on. I think it's pretty complete and well-rounded. 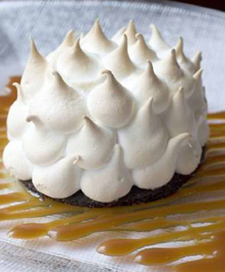 Baked Alaska (Astrid Stawiarz)
Your desserts are stellar. Do you do them yourself or do you have a pastry chef? I've always done pastries and I read tons of books and still have a bunch of ideas that I'm working out, but I have a guy who's here everyday who executes the dishes. I tend to come up with the menus and ideas, but we still do a lot of work in house like chocolates, ice cream, and even sausages. We do everything. I have a wicked sweet tooth.

What kitchen were you in other than Bouley and what were your biggest influences? Hamersley's Bistro in Boston was a huge influence and the kitchen when I worked there was a kitchen like mine, minuscule. He was a James Beard award winner and the sous chef was a James Beard winner a couple years later too. Then two of the other cooks were nominated later as well. It was a very small kitchen but had very serious and bright-thinking cooks in there. Hamersley's was huge, David Bouley was huge. It was when Bouley had just that one restaurant, the original. I've never seen anyone work like that before. It was open six days and six nights a week and he was there cooking every lunch and dinner. But now he's been beaten up by the press for all sorts of reasons these days, since 9/11 I guess. It's a real shame because he was really amazing to watch. Then there's Eric Ripert's Le Bernardin, great place too.

Have any of these guys come into your restaurant? Nope! I've seen Bouley a couple times but neither have been here. The only luminaries that have come were Jean-Georges [Vongerichten] for his partner's anniversary, which I thought was a bizarre choice, but I was honored. Gray Kunz has been in a number of times; Danny Meyer was in here last winter. Some people pass through but I'm not cool enough to be a buddy of Bouley's. He likes real players who like motorcycles and fast women and stuff, but that's not me. Ripert is kind of cool that way, too. Bouley was fair with me when I worked there. Ripert was extremely fair too, and much more together as far as money and running a business than Bouley was. Both were really good though.

Do you have any great kitchen scar stories? I really don't. When I was a young guy Bouley would ask me if I slept in a brier patch because of all the little burns I had—nothing really serious. And in my kitchen the way we operate is that I don't like banging, clanging, or wasted movements. It sets a tone so people are more careful. I hope that doesn't jinx me. I haven't cut myself or burnt myself in any interesting way.

#boerum hill
#brooklyn
#fine dining
#michelin star
#restaurant
#saul
#Saul Bolton
#seasonal
Do you know the scoop? Send us a Tip
A new Gothamist is coming! We’ve moved comments over to our beta site. Click here to join the conversation and get a preview of our new website.