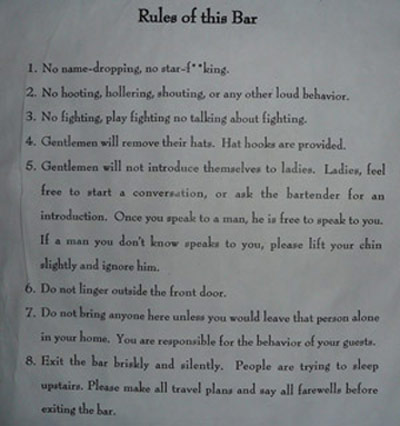 (Gothamist)
According to the NY Times

, he was "found dead on Friday in Hudson, N.Y. He was 42 and had recently moved temporarily to Hudson for a consulting job after marrying the journalist Georgette Moger in May. The cause and time of his death were unknown, according to Ms. Moger, who said she discovered the body."

As the paper points out, "Mr. Petraske’s role in the modern cocktail revival is difficult to overestimate. The opening of Milk & Honey in 1999, in a small space on an underpopulated block of the Lower East Side, helped usher in a new interest in cocktails across America. Unmarked and unadvertised, the tiny bar nonetheless quickly became a phenomenon, known for its unapologetic dedication to expertly made pre-Prohibition cocktails, as well as its eccentric reservation system and exacting rules of decorum."

The bar, originally located at 134 Eldridge Street, had an unpublished phone number, though after hype leveled off it wasn't difficult to walk-in on quieter nights. They also had rules, like "No name-dropping" and "No fighting, play fighting, no talking about fighting." Petraske later turned it into a private club, as he continued to grow a global bar empire, including Little Branch and Dutch Kills in New York, emphasizing classical techniques and craft cocktails.

Last year, Milk & Honey's latest incarnation in the Flatiron district was forced out by building demolition. The Times says, "Mr. Petraske had planned to eventually open a third version of the bar. He was also expected to open a new bar, Falconer, in Red Hook, Brooklyn, this fall."

#bar
#cocktail
#milk and honey
#mixologist
#Sasha Petraske
Do you know the scoop? Comment below or Send us a Tip