In 1944, Life magazine described Sammy's Bowery Follies as an "alcoholic haven." The part-local dive, part-tourist trap always drew a huge mixed crowd. It was opened in 1934 at 267 Bowery (between East Houston and Stanton Streets) by Sammy Fuchs, who branded it as the Stork Club of the Bowery. He welcomed everyone from vaudeville acts to "Bowery bums"... or as the NY Times had put it, “drunks and swells, drifters and celebrities, the rich and the forgotten.” But as photographer Weegee later wrote, it was really a “poor man’s Stork Club. There’s no cigarette girl—a vending machine puts out cigarettes for a penny apiece. There’s no hatcheck girl—patrons prefer to dance with their hats and coats on. But there is a lulu of a floor show.” 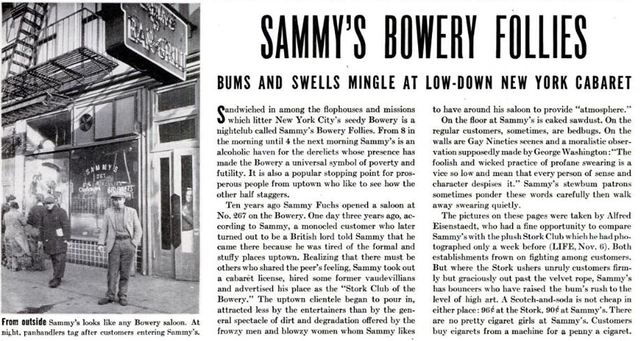 From the Life profile:

“From 8 in the morning to 4 the next morning Sammy’s is an alcoholic haven for the derelicts whose presence has made the Bowery a universal symbol of poverty and futility. It is also a popular stopping point for prosperous people from uptown who like to see how the other half staggers.”

The bar remained there through 1970, one year after Fuchs (known at this point as the Mayor of Bowery) died. Click through for photos of the old joint, and here's another quick look back:

#flashback
#history
#sammy's bowery follies
#the bowery
Do you know the scoop? Comment below or Send us a Tip