THE VIBE
You might already be familiar with Samesa: founded in 2015 by bearded brothers Max and Eli Sussman, it's enjoyed runs as popular pop-ups at Berg'n and Threes Brewing. Well, now the Sussmans have a permanent place to sling their shawarma (among other Middle Eastern delights) in Williamsburg, and the city is a better place for it.

The just-opened Samesa sets down roots in the former Meat Hook Sandwich spot on Lorimer which, as you may remember, is tiny. The railroad-style footprint's the same—dining area, ordering counter, deep kitchen—but the Sussmans moved those jutting-out tables to the sides and added a "wrap-around" corner counter by the front window. You still wouldn't call it spacious (or even particularly comfy) but it feels less claustrophobic with this arrangement, and it's certainly fine for the amount of time it'll take you to devour one of the Sussmans's pitas or plates.

But Samesa is also more than simply another Williamsburg grab-n-go spot. There is definitely a welcoming, neighborly atmosphere in here, whether it's because kitchen manager Penny Martone might offer you a look at their pita-making process in back, or that Max is hanging by the counter with his baby son asleep in his arms. The Sussmans advocate, and put into practice, such important things as sustainable sourcing, minimizing food waste, and providing fair wages to their employees, and everyone I interacted with at Samesa during two large dinners last week exuded a kind of low-key but genuine hospitality, as if I were a frequent guest in their home. 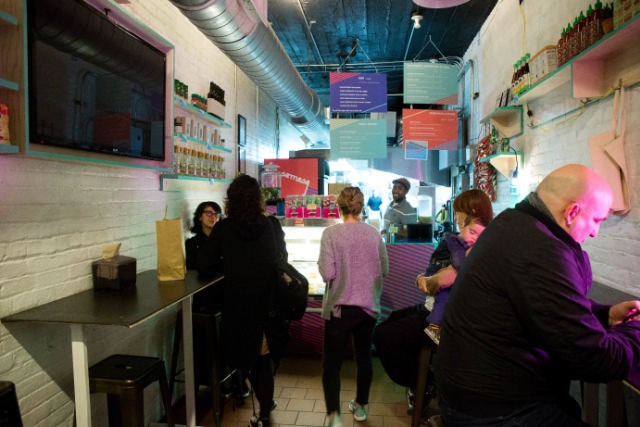 THE BITES
The Samesa menu takes its cues from the Middle Eastern favorites the Sussmans grew up eating in Southeast Michigan, home to vital communities of immigrants from countries like Iraq, Syria, and Palestine. There is no hummus or falafel available, but definitely order the brothers' signature Chicken Shawarma, which will get you a pile of moist, seasoned, spit-roasted thigh meat either in a pita or, my preference, on a platter with rice, a mess of pickled veggies and cucumber salad, just-baked pita on the side, tahini and green zhug finishing things off.

Even better than the bird might be the Braised Lamb, which comes tender, pulled, sweet, and sauced and goes really, really well with Samesa's fiery red zhug (as does everything, actually... that stuff is addictive). For a different sort of flavor and texture palette, try the Fish Kofka, which is like a snappy-skinned, spiced-up sausage on a soft hoagie-style roll, lubricated by sumac mayo with pickled slaw for crunch. And the boat of crisp Za'atar Wings with creamy labneh dressing for dipping make for a fine addition to any meal.

Samesa's vegan smoothies do the work of a milkshake here, but are perhaps more healthy? Whatever, I loved my thick, rich Beet Cocoa concoction with cherries and "activated charcoal," which functioned as both comforting dessert and energy boost. Finally, the baked goods are excellent, and you can order with confidence whatever's on offer in the display refrigerator at the counter.

THE VERDICT
With any luck, Samesa will settle in for nice long stay on Lorimer. The friendly atmosphere and soul-satisfying food are a worthy replacement for the great Meat Hook sandwich, and a welcome, homey addition to this part of Williamsburg.