Saltie's Sandwich Genius Is Back In Williamsburg

Restaurants and bars come and go at a staggering rate in this town, and while we might mourn the loss of way-too-many spots, some closures hit a little harder than others.

Saltie, Caroline Fidanza's Williamsburg sandwich shop masterpiece that had a glorious eight-year run on Metropolitan Avenue before shutting down in 2017, is a closure that still hurts. I love the fact that this amazingly good and unabashedly unique little cafe existed at all, and I ate there as often as I possibly could, feeling happy and satisfied every single time. Its absence still stings, even two years later, especially whenever I'm in Williamsburg trying to figure out a food plan.

Well, now Fidanza is back, and in Wiliamsburg, with six brand new sandwiches available only at Marlow and Daughters, Andrew Tarlow's "whole animal" deli and butcher shop at the western end of Broadway. The location makes total sense, both because of all the meaty resources readily available to the sandwich inventor, and because Fidanza worked within the Tarlow empire for many years before opening Saltie.

It's not exactly Saltie 2.0—the only seating is outside on a plank, there's no Scuttlebutt, no vegetarian options and, the biggest hole as far as I'm concerned, there are no cookies—but it still totally kicks ass.

I ate four of Fidanza's half dozen creations over the weekend, and all were delicious top quality sandwiches. On the menu hanging over the counter, they're listed by number, but you can order by primary ingredient as well. Each one costs $14 and provides ample sustenance for a complete meal.

For example, there's the magnificent Roast Beef which, like all but one of the offerings here, comes on Fidanza's famous focaccia. The bread tastes great, adds a nice craggy texture, and serves as a sponge to soak up, in this case, a monstrous slather of mayo. Herbs, capers, and some Parmigiano round out the broad flavor palate of this beauty.

The Roast Pork, made with pig's knuckles on the day I ate it, held its own under an onslaught of bitter broccoli rabe, sharp provolone, fiery chili, and, again, a thick glob of mayonnaise. There's an Italian Hero-inspired sandwich here too and, as you can imagine, it's a stunner, packed with salami, coppa, mortadella, and mozzarella, punctuated with roasted peppers, tapenade, a mess of greens, and a splash of oil and vinegar.

The Meatball is served warm, and on ciabatta, and is spicier than you expect it to be, balanced by the sharp bite of some good pecorino. The final two in Fidanza's sandwich six-pack feature Smoked Ham and Tonnato, and Schnitzel with Slaw. I'll try those next time, for sure. 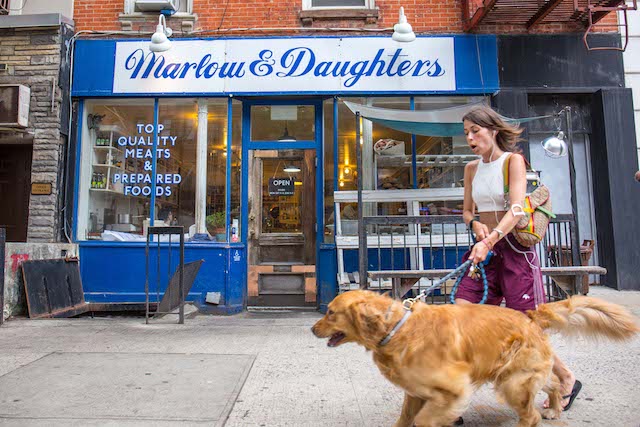 Marlow and Daughters, now serving Saltie-esque sandwiches, is located at 95 Broadway, between Berry and Bedford in Williamsburg, and is open Monday through Saturday from 11:00 a.m. to 8:00 p.m., and on Sunday from 11:00 to 7:00. Call first though if you're showing up later in the day, to make sure they haven't run out bread (718-388-5700; marlowanddaughters.com)