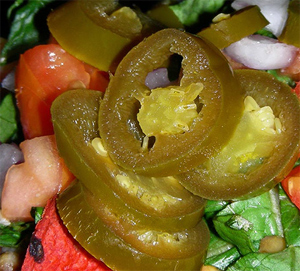 It was the jalapeno all along. Yesterday the F.D.A. announced that after a three month investigation into a salmonella outbreak that has sickened at least 1,251 people in 43 states, officials have finally been able to match the bacteria strain to a single Mexican-grown jalapeno pepper handled by a small Texas produce shipper. Fresh tomatoes were previously believed to be the culprit, and an F.D.A. warning against certain tomato varieties has cost growers an estimated $450 million. Oopsy!

But far from issuing a mea culpa to tomato growers, F.D.A. officials told reporters yesterday that the salmonella outbreak still could have been caused by tomatoes. Who knows? They also haven't determined where the guilty pepper became tainted – in Mexico, at the plant in Texas, or somewhere in between. The plant is recalling all its jalapenos, but the FDA has no idea how widely its produce was distributed.

So now tomatoes are okay, but the government is warning everyone to avoid fresh raw jalapenos, or products made with them, like fresh salsa. In the mean time, the outbreak has increased calls for the food industry to track produce from the farm to table with bar codes. Michael Doyle, the director of the Center for Food Safety at the University of Georgia, tells the Times, “The recent situation shows that we have deficiencies in the system. My experience with the industry is that in part, certain segments of the industry would rather not have food trace-back.”

#fast food
#jalapeno
#local
#mcdonald's
#new york
#outbreak
#safe
#salmonella
#tomato
Do you know the scoop? Comment below or Send us a Tip