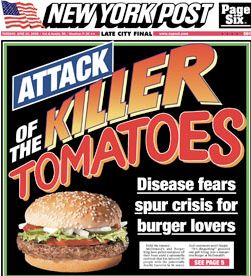 Panic is gripping stomachs nationwide as news spreads about a salmonella food poisoning outbreak caused by certain varieties of tomatoes. The FDA has not been able to pinpoint the source of the poisoning, but the Centers for Disease Control and Prevention reports at least 23 people, mostly in New Mexico and Texas, have been hospitalized since mid-April, with no fatalities… yet. The main symptoms are diarrhea and extreme abdominal pain.

Tomatoes grown in New York State are believed to be safe from the bacteria (found in animal feces), but some New Yorkers are still feeling the affects of the outbreak, as Subway, Chipotle, Outback Steakhouse and Taco Bell have all 86’d tomatoes. McDonald’s will keep the grape tomatoes in salads, but has pulled tomatoes from burgers nationwide. The Post gets some local color from disgruntled McDonald’s diners, quoting 17-year-old Beata Royzman, who speaks for all of us: “It's disgusting.” And the Daily News talks to 24-year-old Big Mac eater Tashi Topgyal, who cries, “I wish they had the tomatoes. It's a vegetable. It's the healthy part of the meal!”

Have the days of BYO tomatoes arrived? The FDA recommends steering clear of raw red plum, raw red Roma, or raw round red tomatoes, but cherry tomatoes, grape tomatoes, tomatoes sold with the vine still attached, and tomatoes grown at home are believed to be safe. The FDA also warns consumers to watch out for fresh salsa, guacamole, and pico de gallo, which typically contain raw tomatoes.

#fast food
#mcdonald's
#outbreak
#salmonella
#tomato
Do you know the scoop? Comment below or Send us a Tip