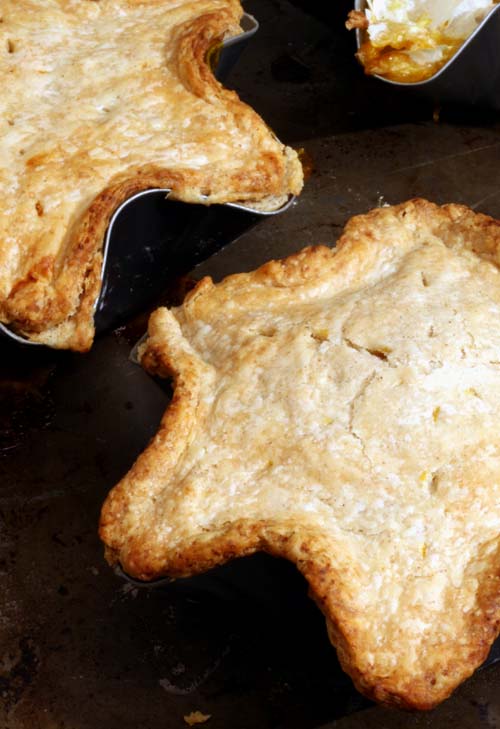 Here is a meat pie to warm and satisfy you, now that winter has come and even snow flurries are upon us. Loosely inspired by Moroccan basteeya, this pot pie marries a rich and savory meaty filling with traditionally sweet spices, and you can sprinkle cinnamon and sugar on top if you like to heighten the effect.

The crust is made with lard and butter, (yes, lard AND butter) resulting in an extravagantly light and flaky pastry that contrasts well with the luscious filling.

Prepare the pie crust as described in the recipe below, then leave it in the fridge to rest until needed.

Continued after the jump...

Warm up the stock, and add in the saffron, leaving it to steep.

Remove all external fat and skin from the duck and set aside. You should absolutely render the fat and skin to have tasty, tasty duck fat around the house. Cut it all up into little chunks, put it in a pot with some water, and simmer for hours. When that's done, strain and refrigerate. The next day, you can skim the fat off the top, and enjoy both that and the duck stock that will have gelled on the bottom. The fat and skin can be refrigerated if you don't have time to go through this process immediately.

Break down the duck into 7 pieces: 2 legs/thighs, 2 breasts, 2 wings, and the rest of the carcass. Lightly salt them all.

Roast the duck for about 40-50 minutes, taking out pieces as they are done (when the juices run clear, that is).

Let the duck pieces rest 15 minutes or so to cool down, then shred the meat. Save the neck and bones in your freezer to make stock (or make it immediately, if you prefer).

In a small saucepan, saute the onion in olive oil until golden. Remove the onion from the pan and transfer it to a large bowl. Mix in the shredded duck, spices, and cilantro, and set aside.

Whisk the flour and olive oil together in the saucepan and cook over medium heat until it is nice and thick and just barely golden, still fairly pale. This is your roux. Add the saffron-steeped stock to the roux and whisk it all together.

Prepare your pie tins by buttering them, sprinkling flour over them, and then shaking out any extra flour. We really think this is tastiest made in smaller, deep-dish tins - the pies pictures above were only about 2-3 servings each.

Roll out the pie dough about 1/8" thick and line the pie tins with it.

Fill the pies with the meat mixture. Add juice of 1 1/2 lemon (spread out among multiple pies as necessary). Pour the sauce over the meat. Cover with a top crust, and poke a few holes in it to release steam.

When you put the pie in the oven, lower the heat to 425 F. Bake until top crust is pale gold, about 25 minutes. At that point, rotate the pie from front to back (to even out the baking), reduce the heat to 375 F, and bake an additional 30-35 minutes until the crust is deep golden brown and it is done.

Flatten into a disk, wrap with plastic wrap, and refrigerate until needed.