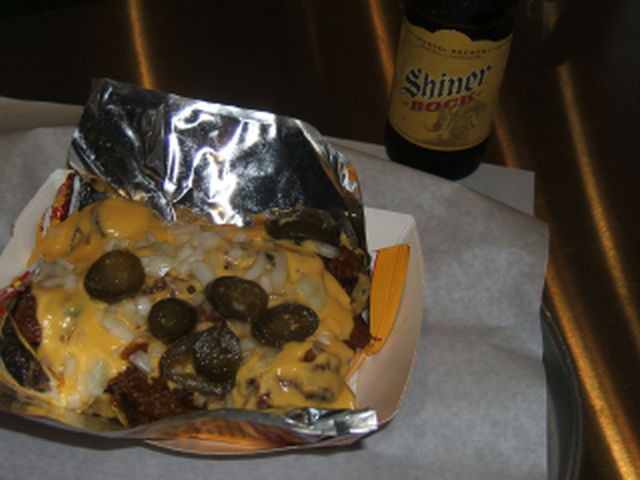 When we learned that R.U.B. just started serving Frito Pie we hastened to Chelsea to try one. Until we ate our first one the other day, we always thought that a Frito Pie, was literally a pie made with corn chips, sort of a redneck quiche Lorraine. That’s not to say that Gothamist expected a filling of Gruyère cheese and lardons, we were pretty sure that chili, cheese and jalapeños would play a prominent role.

What we didn’t expect was that it would be open face, as in a bag of Frito’s torn open and done up like nachos. So much stuff topped our pie that we wondered whether there were actually any Fritos lurking under the blanket of chili and cheese.

And to tell the truth, we were a little put off by the somewhat sloppy appearance of the whole thing. But when Scott Smith, R.U.B.'s pitmaster told us he never tried one until the restaurant introduced it, we were eager to dig in. "I never had one growing up, it’s a Texas thing. We never had good junk food like that upstate," Smith said.

So armed with another "Texas thing," namely an ice-cold bottle of Shiner Bock, we dug in. Despite our initial trepidation, it was pretty darn tasty. In the interest of full disclosure, Gothamist did not eat said pie after a night of consuming alcoholic beverages; it was a late lunch. The crunchiness of the Fritos went great with the meaty, smoky chili and the pickled Mexican jalapeños provided just the right amount of heat. As the Fritos softened, the whole affair reminded us even more of nachos, but better namely because the meat in nachos is usually terrible, whereas the meat in R.U.B.'s chili is slow-smoked brisket.

When asked where the pie got its sweet flavor from Smith said, "It’s got a bit of beans ... It’s not traditional but its good.” Now if only Gothamist could convince Frito-Lay to reintroduce the jalapeño corn chips that were popular for a brief time during the '80s.

#Chelsea
#food
#gothamist
#restaurants
#Scott Smith
#texas
Do you know the scoop? Comment below or Send us a Tip