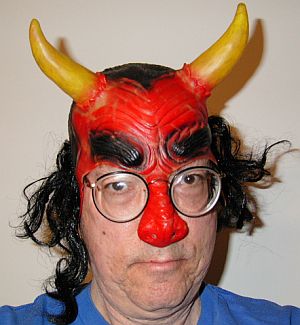 Since 1993, Robert Sietsema has been eating his way through New York on behalf of the Village Voice; his specialty is shedding light on restaurants and cuisines that may have gone otherwise undetected by a broader audience. Sietsema's approach to the city's sprawling restaurant scene can perhaps best be summed up the titles of two of his books, Secret New York and Good and Cheap Ethnic Eats (now in its third edition). Tonight the Voice will be celebrating Sietsema's adventures in gastronomy with its first ever Choice Eats tasting event at The Puck Building, which will feature over 30 New York City restaurants and cuisines from around the world. Advance tickets for Choice Eats are sold out, but a limited number of $35 tickets will be sold at the door tonight, beginning at 5:30pm. Details here.

What's worst experience you’ve had at a restaurant? I was eating in an Avenue A sushi parlor prior to a longish trip to West Africa. As I ate my sushi, I saw a giant cockroach brazenly making its way across the dark ceiling. I was the only one who saw it. 'Should I say anything?' I wondered. Thankfully, it passed over my plate, but when it reached the ceiling over the adjacent table, it lost its grip and plummeted onto the sushi assortment of a college girl sitting with some chums. She let out the most bloodcurdling scream you’ve every heard. And all activity – including service – ceased for about half an hour as the restaurant erupted in shouting and turmoil, the girl in tears because the restaurant wouldn’t comp the meal.

What are the most overrated, over-hyped restaurants in New York right now? I have a confession to make – I hate Pinkberry. I was also disappointed in Resto, though I think I’ll go again and recheck it. Though I love the chef’s work, Morandi was a disappointment. Steakhouses, in general, often represent a poor value – I hate the practice, which seems to be growing, of restaurants charging you for sides that ought to come with the entrée.

What restaurants are being unfairly maligned? I think Bruni’s award of one star to Katz’s was something of a slam, though I respect his work and writing (but not his book about Bush). Katz’s is one of the city’s best restaurants.

What’s the breakdown by borough of this Choice Eats event? The list is still in formation and will be until the day of the event – we want to include as broad a range of restaurants as possible, but as I write this [February 27th], the breakdown is as follows: Manhattan 16, Brooklyn 11, Queens 4, Bronx 1. We expect at least six or seven more places to be added in the next week or so.

With over 30 restaurants offering tastings, which ones should people save room for at all costs? Ha ha – that’s a loaded question. I’m not allowed to play favorites at this point. Let’s just say that I only let them approach places where I absolutely loved the food.

What borough has the highest number of your favorite restaurants? Eek! That’s a difficult question, since location of a restaurant depends on so many things. I’m a bit sad that there are no Staten Island restaurants on the list, but that partly reflects willingness of small places operated on a shoestring to trek to downtown Manhattan. Note that many of the Manhattan places are in the northern part of the island – Harlem and above – which is like a separate borough unto itself. Bay Ridge, Brooklyn, and Astoria, Queens are current restaurant hot spots, as is Lydig Avenue in the Bronx.

What are your favorite cuisines? Probably whatever I happen to be eating at the moment, but I’m particularly fond of food from West Africa, Central Italy, the Isaan region of Thailand, most of China, the Caribbean, Mexico. Hell, I even like French food.

What’s your least favorite cuisine? There are three or four cuisines I might mention in which the food is insufferably bland – but I won’t because I don’t want lots of hate mail. Suffice to say the country that’s giving away free fuel in disadvantaged parts of the city often has awful food. We should send good food down there as thanks. New York clearly has the best and most diverse food in the world right now.

You recently wrote a cover story for the Voice about how bogus Iron Chef is. What are some of the responses you’ve gotten to that article? I was delighted by the responses, especially the thoughtful flames – but some flamers went off their nut, either because they really love the Iron Chef, or because they have a vested (and often undisguised) interest in the show or the network. The funniest responses came from crybaby Iron Chef judges. I never expected so many responses – it was like poking a hornet’s nest, and I’d do it again in a second. I approached the taping as an interested occasional watcher of the show, and I really assumed it was some sort of contest, no matter how manipulated. The argument that everyone knows TV is fake doesn’t hold water. What would you say if you learned every NBA game was fixed, and that the players had carefully rehearsed the sequence of plays – including ball turnovers – according to a script?

Have you ever sensed that you’ve been identified by the staff when reviewing a restaurant? Virtually never. It’s actually rather easy to go unrecognized as a critic. Most critics want to be recognized since they love having restaurateurs kiss their ass and bring them free food. The Voice pays for what I eat, so I don’t need any free food. When I go into a restaurant I want to eat exactly what interests me and nothing more. And I don’t want employees scurrying around me and bowing and scraping.

What’s the most memorable feedback you’ve gotten from a restaurateur after one of your reviews hit newsstands? I sometimes get handwritten notes from restaurateurs thanking me for reviewing their restaurants, and one café from Barbados suggested that my piece had saved her place. That sort of thing happens occasionally, and it makes me very happy.

Ever been banned from a restaurant? No, if I were recognized that might happen, but I’m not. Maybe if I pretended to be Frank Bruni or showed some cleavage like Restaurant Girl. (Really, when is she going to become Restaurant Woman?)

In retrospect, have you ever wished you could issue a retraction with one of your reviews? One of the underlying, false assumptions of restaurant reviewing is that a place remains consistent from year to year or even day to day, which is why the practice of reviewing places in the opening weeks – and the race on the part of critics to get to those places first – is so pernicious. I’m guilty of it sometimes, too, but I do wish there would be a moratorium on reviewing a place till is settles down and becomes more consistent. Accordingly, I wonder about places I didn’t like at first. Did they become better afterwards? Did the places take the advice of patrons (and critics) and make improvements? We’ll never know because everyone is racing to the next new place.

What’s the biggest tab the Voice has ever picked up for one of your reviews? Probably around $350 – which means I’ve never eaten at Masa.

Have there ever been any “issues” from editors about the size of a bill? No, but I’m uniquely able, due to the uniquely broad price range I cover, to balance cheap places with expensive ones and make my budget come out right.

Do you still put out your food zine Down the Hatch? I’d love to be doing it, but it’s on hiatus due to the volume of my other writing commitments.

Where are you from originally? I was born in Michigan, grew up in Chicago, Minneapolis, and Dallas, and went to school in Austin, Texas and Madison, Wisconsin. Midwestern expats make the most dedicated New Yorkers. Nevertheless, I’ll always feel like an immigrant.

What neighborhood are you in now? I live in the West Village due to the rent stabilization laws. Though I’d love to live in Brooklyn, I can’t afford it.

What’s your second favorite neighborhood restaurant – no need to advertise your favorite hang-out. I love eating breakfast at the incredibly decrepit Bonbonniere on Eighth Avenue, and Malatesta is one of my favorite hangs for Italian food. For wine, I hit D.O.C., a Sardinian wine bar in Williamsburg. Oh, and I get a lot of chicken rotis from a Trinidadian deli at 16th and Sixth Avenue. I’m addicted to the sliders at Pop Burger, and the watermelon and pork belly salad at Fatty Crab. I love the burger at Bar Six, red and juicy with great fries. I eat noodles on Eldridge Street at least once a week, and also love Momofuku. But then who doesn’t?

If you could change one thing about dining in New York, what would it be? Smaller mark-ups on wine!