For anyone missing Foodswings, our latest installment of Quick Bites brings us to Fort Greene for some vegan fast food.

THE VIBE
On the end of Clermont Avenue in Fort Greene, right across from a bland luxury rental building and steps away from the cars speeding on Flushing, co-owners Jonathan Schneider, Patty Wu, and Allison and Matt Robicelli have opened a casual all-vegan spot (in a former Oaxaca Taco) called Rip's Malt Shop.

The bright red Rip's awning out front is new, but the lighted arrow is an Oaxaca holdover, and the interior layout of the narrow space is also pretty much the same, with tables up front, ordering counter and open kitchen in the rear. The big bonus at Rip's, though, is the pleasant back yard with picnic-table seating for about 20, and a turf lawn featuring cornhole. There are also new murals by Belowkey back here, and the far wall will soon be covered in chalkboard paint, for kids and anyone else who wants to tag the hell out of the place.

On two recent visits to Rip's the service was friendly, knowledgeable, and efficient—total professionals.

(Getting back to the Robicellis for a minute: Yes, this is same couple who made such great cupcakes out in Bay Ridge until personal health issues forced them to move to Maryland. In addition to helping to launch Rip's from afar, they are also newly involved in the rebranding of Oaxaca as Revolucion de Taco.) 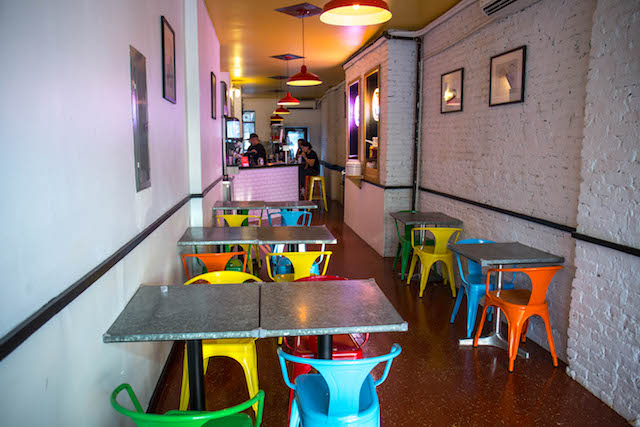 THE BITES
Other than its understated but firm commitment to plant based food, there's nothing really innovative about the recipes at Rip's, but man do they nail these vegan versions of fast comfort food classics. Take the Cheeseburger, for example. The patty comes to you via Beyond Meat, and there's enough going on here flavorwise—get it loaded with fresh toppings—that (if you're typically a meat eater) a bite or two in you don't even really think about it being vegan, just that it's a really good sandwich. It comes with chips and a pair of fat pickles, too.

This keeps happening as you make your way through the Rip's menu. The Coney Dog, in which a Field Roast sausage is served swimming in smokey chili and melted cheese, may lack the snap of a first rate meat frank, but that doesn't detract from the deliciousness. The Chopped Cheese is packed with flavor (it's the spiciest thing they served me here, which I know isn't bodega-authentic, but neither is vegan ground "beef"), and the Chicken Salad was a creamy delight, the fake meat not even a tiny bit dry. And if anything doesn't punch quite hard enough for you, try some of the Aardvark habanero hot sauce by the ketchup and mustard, it'll do the trick. 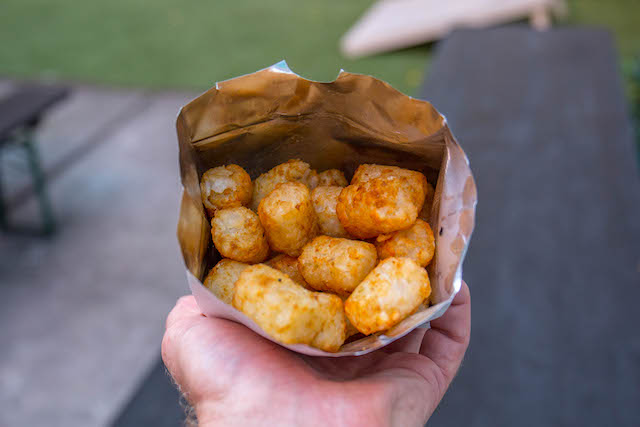 The side dishes I tried also performed as hoped. The Tater Tots don't have that preferred crisp coating, but the interior is nice and chunky. The mayo-less Macaroni Salad, the pasta cooked firm with just the right hit of sweetness from the peppers, ably satisfied a summer-long craving of mine. And for dessert, there's Van Leeuwen's vegan ice cream, available in straight-up scoops, oatmilkshakes, or a wonderfully decadent build-your-own sundae.

THE VERDICT
Rip's Malt Shop comes out a total winner. Among other things, it's the perfect place for a mixed crowd of vegans and omnis who want to eat some good casual food at okay prices in a chill setting, and maybe knock back a few beers or glasses of rosé while doing so. Hopefully enough Navy Yard workers discover the place to give it some life.