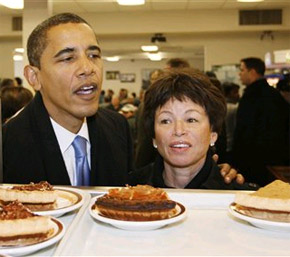 While the Obamas have yet to discuss any culinary changes in the White House, some chefs have discussed what they would prepare for the inaugural dinner if called to task. The only New York chef asked was Eric Ripert, who also has a DC restaurant. He said that if he was in charge "he would highlight different regions of the country by offering prawns from Santa Barbara, Calif.; scallop chowder from Nantucket Bay and stuffed quail with Wisconsin cheddar grits. And for a comforting finish Ripert would end with an American favorite: peanut butter. Or rather, a peanut butter souffle."

We asked the underground culinary whiz kids at Whisk & Ladle what they would whip up if asked, and their resident sweet tooth Danielle told us: "Something very classic and American. I would certainly bake my own rendition of an apple pie for dessert...paired with a nice subtle pistachio ice cream to mix it up." Before the dessert? "A steak entree without a doubt...with creamed parsnips with a hint of bourbon, a staple W&L side. Roasted asparagus for some crunch and some green. A medley of different savory pate choux's as an appetizer. Beet salad. I think the Obamas would like beets...no?" Actually, Barack is anti-beet, but you know what they say about change.

#eric ripert
#inaugural dinner
#menu
#Whisk & Ladle
Do you know the scoop? Comment below or Send us a Tip
A new Gothamist is coming! We’ve moved comments over to our beta site. Click here to join the conversation and get a preview of our new website.