Drinking oneself into a stupor seems to be a cultural touchstone for Germans such that they even have a word for it: bierleichen, or "beer corpse." It's also the name of one of Ridgewood's newer bars, a Seneca Avenue beer hall and metal bar that celebrated its official grand opening this past weekend. True to its name, Bierleichen is pouring ten different draught beers with a focus on brews from Germany like Hofbrau, Jever and Kostrizer. And of course you can get any of them served in a boot.

Besides beer, they've got "Schnapps," high alcohol spirits that are on the harder side (101 proof Five & 20 Bierschnapps) and more fruity (56 proof Schladerer Edel-kirsch Cherry Liqueur). Another German specialty: the Shotenfreude ($4)—a play on schadenfreude—which buys "a shot of cheap, warm vodka" with all proceeds benefitting the New York City Coalition Against Hunger. 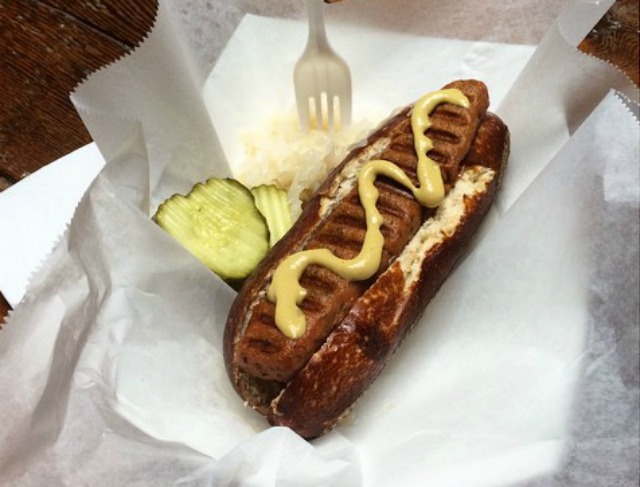 To ward off beer corpse, turn your attention to Bratwusrt or Knackwurst ($9) on a pretzel roll with pickles and kraut or a big, salted Pretzel ($5) with an optional side of obatzda ($2), a dip made from cheese and beer. Brooklyn-based Yeah Dawg is also providing vegan, gluten-free and soy-free sausages made from carrots, beets, potatoes, sweet potatoes, a blend of gluten-free flours, herbs and spices.

They're not a traditional venue, but they're doing some live music on special occasions, plus burlesque shows on future Sundays and "goth" nights on select Mondays. All the time, try your hand at some foosball or chill out in the back garden, which boasts some deck chairs and picnic tables under the sun.

#beer garden
#Bierleichen
#new restaurant and bar radar
#queens
#ridgewood
#original
Do you know the scoop? Comment below or Send us a Tip