640 tons of mozzarella cheese, 885 tons of pasta and somewhere in the ballpark of 10 million meatballs. Just a few stats that show the marinara-drenched history of Carmine's, the family-style red sauce Italian restaurant that's celebrating 25 years in New York City this year. In an era of powerhouse restaurant groups and teen chef tasting menus, Carmine's is like a warm comfort blanket, a place where pretension slips away in favor of One More Meatball and the warm lull of a food coma.

Artie Cutler opened his restaurant on Broadway in August of 1990 and aside from offshoot locations in Times Square, Atlantic City and beyond, not much as changed. "The food is the same for 25 years, which doesn't sound fun or exciting," explains CEO Jeffrey Bank, who along with Cutler's wife Alice, now runs the business. "It's challenging for us when we hire chefs because we need to hire a chef that has a great palate, who understands quality. We are a scratch kitchen cooking everything from scratch ourselves, yet we are not allowing the chef to create anything."

In fact, the only "new" dish at the restaurant arrived 10 years ago, a chicken wing version of the restaurant's popular lemony Chicken Scarpariello. Perhaps frustrating from an innovative chef's point of view, but customers don't have a problem with that. "Our guests love the classics. It's not going to sound sexy for this article, but they love Caesar Salad, Chicken Parm, Penne alla Vodka. True classical dishes is what they love," Bank says. "And it is because we are very, very consistent." 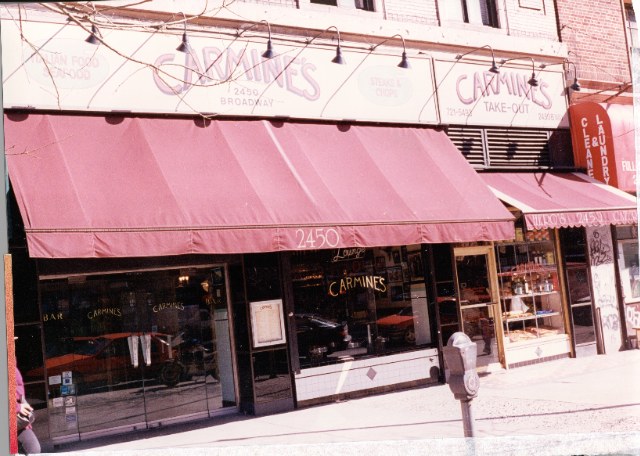 The restaurant's exterior in 2001 (courtesy of Carmine's)

Of the red sauce, family-style model, Carmine's is arguably the most famous of a bunch that includes similar spots like Tony's di Napoli and Rubirosa. The UWS location has the capacity for 375 diners, many of whom travel to experience a meal there.

"We have people from the whole neighborhood eat with us. We have people from The Bronx, Queens, Jersey, down from Connecticut, we really we hit everybody," Banks says. "Really the only person we don't hit is the intimate dinner for two, the hoity-toity. That's not us."

Like the food, the inside of Carmine's remains stubbornly, charmingly in the faux past, with its old timey photos and drawings, gently scuffed wooden chairs and tall, tin-type ceilings. No Edison bulbs, just medieval-inspired chandeliers and spotlights for dramatic effect. "We kid around whenever we build another Carmine's that we tell the general contractor we need it to look clean, but old," Banks jokes. "You know they also want to varnish it and make it perfectly brand new and we are like no, no, no. It's gotta have a little worn to it. It's got to have a little spot there that has to be clean but dirty. Weathered."

The waiters portion the spaghetti and meatballs with the spin and flourish of a practiced hand, while enormous platters of Veal Marsala and rigatoni whiz by above customer's heads. There's no daintiness or preciousness, just simple food served in dinosaur-sized portions at staggeringly reasonable prices. Seriously: even the most expensive items on the menu—which top out at $38.50—are meant to serve four to six people. This isn't the space for restraint—or your finest silk blouse, for that matter.

#carmine's
#family style dining
#italian
#new york institutions
#red sauce
#original
Do you know the scoop? Comment below or Send us a Tip