After nearly five years, 51 questions, and countless squirts of donkey sauce, Guy's American Kitchen & Bar endures—nay thrives—in Times Square. The restaurant that inspired one of the most viral NY Times reviews ever still beckons to tourists like moths to a frosted tip flame. And so it went for several Gothamist reporters who revisited Flavortown last Friday.

When we first visited Fieri's restaurant in 2012, we described the experience as "[bottlenecking] around a car crash." Emotions for this return visit could be best summed up as "friggin' pumped, bro." Weeks leading up to the reservation I fielded shouting Gchats of "SO EXCITED!" from colleague Rebecca Fishbein. Menus were pored over, Yelp reviews consumed with the same voracity we would later apply to "Awesome" Pretzel Chicken Tenders.

There wasn't even a hint of irony to Ben Yakas's query as to whether we should "just order one of everything on the menu." We didn't, but would it surprise you to know that we kinda wish we had? 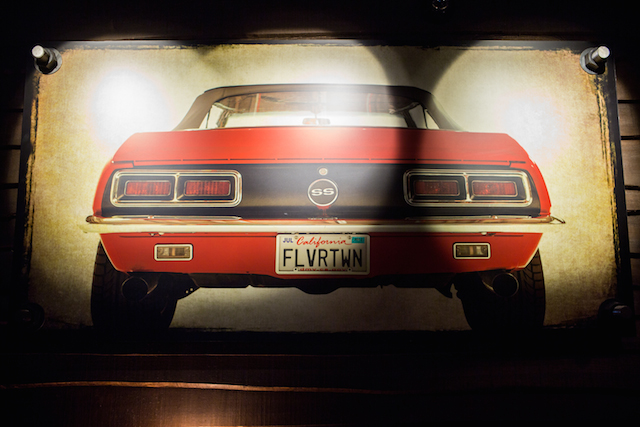 "I expected the food to be truly terrible, but it was merely mediocre," Fishbein summed up when I asked for feedback on our meal.

Did Fieri, who was irritated by the Pete Wells review, actually take some of the criticism to heart? Can a Times Square restaurant inspired by a 1967 Chevy Camaro SS Convertible-driving TV host actually serve passable food? Are we going to spend the next several paragraphs writing in question form?

Possibly, possibly, and no.

By and large, the restaurant has vastly improved on the "fat, sugar, grease and merch by the bucketful" situation we encountered on our visit years ago. Appetizers, like three different kinds of flavored french fries—in particular the buffalo sauce-drenched Vegas Fries and the seasoned Garlic Fries—were not only passable but pleasurable to eat, with no oil slicks to navigate. There was also improvement in the aforementioned chicken fingers, one order of which made it to the table, while another was accidentally (and hilariously) dumped on one of our dining companions by a food runner. 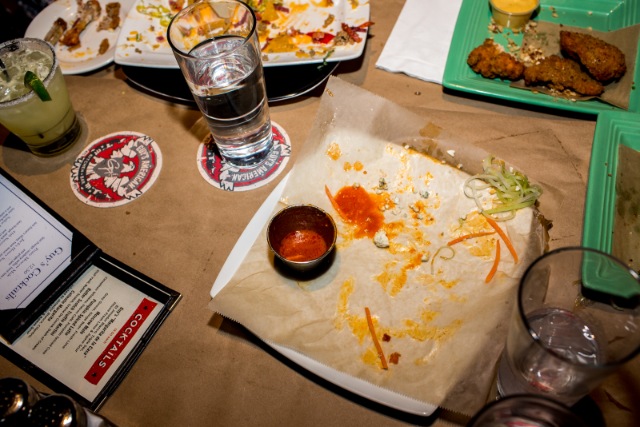 But a spicy honey-Dijon dipping sauce-stained shirt didn't dampen the mood. Italian Nachos, though declared "kind of weird" by consensus, were nonetheless finished down to the last tortilla chip, same with an order of Buffalo Bleu-Sabi wings, which were "off the chain but still safely inbounds," according to another diner. Very few of us would have expected an Empty Plate Club situation after the appetizers.

As is often the case at many restaurants, entrees didn't hold up quite as well. Scott Heins describes the "Motley Que Ribs" as "really bad...barbecue sauce just had no punch or originality and the ribs were a bit undercooked, giving off a rubbery texture." The meat in my otherwise unoffensive "The Big Dipper" French dip sandwich was the opposite, dry and parched with a cafeteria lunchmeat look.

What else will you find? "A mac n cheese bacon cheeseburger that will teach you, whether you want to or not, how to unlock your jaw (and will also send you down a shame spiral you never imagined you could reach)," as described and demonstrated by Yakas. It's called "The Hunch," Ben, and it's a Fieri classic.

"My martini was one of the worst drinks I've ever had and was akin to something I'd drink at a 'fancy' frat party, like one that's luau themed or something," Fishbein admits, omitting the fact we all warned her against ordering it in the first place. "I am still not sure which was donkey sauce, which is disappointing." (It was on the burger.)

We know you probably won't read this and hop on the Q to Times Square, just like this blogger's devotion to Applebee's probably didn't lead to a spike in "Brewtus" sales at the chains NYC offshoots. But if you must eat in the area, why choose a generic Irish bar or a similar chain but with more boring names?

Unlike those places, Guy's offers something singular to NYC—where else can you be blessed by divine artwork featuring the father, the son, and the holy Kid Rock?—while also being wrapped up in our food culture in ways you might not immediately appreciate.

"Everything about Guy's is really gauche and loud, and some of the food is too greasy to really enjoy. But, looking at the menu, it's not like you can't see the menu of every Brooklyn gastropub/embrace of hugely unhealthy 'American' food staring back at you, except now it's wearing Oakleys and has frosted tips," muses Dave Colon. "That reflects worse on those places than on Guy's, because at least there's no pretension or Edison bulbs signifying that you're in a serious place that serves serious pulled pork sliders."

And it'll probably cost about the same, too. Our meal for nine of shared appetizers and entrees, as well as two alcoholic drinks per person, came out to $465, tax and tip included. Sure, you'll still be in hellacious Times Square, but if you're gonna go, go down in flames—and maybe those flames are printed on your bowling shirt.