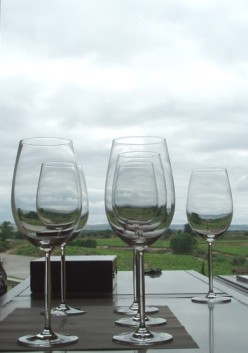 Perhaps our favorite expression we learned in a recent visit to Rioja, in Spain, is “cojonudo.” It may be slightly vulgar as the etymology of the word has something to do with balls, cojonas, but that is not the only reason we like it. The word is used is to describe something that is really…really good. For example, the banana pudding at Magnolia Bakery can easily be described as cojonudo. As a writer, it is always nice to have an extra adjective in the back pocket. Especially when delicious does not seem sufficient in describing the bold, multi-faceted red wines of Rioja.

To truly appreciate red Rioja wines it helps to understand the people who make them. The Spaniards are some of the most generous, hospitable people we have ever met. Strangers invite you into their homes for a nibble of chorizo and a copita of Rioja Reserva. Grandma is usually close by, effortlessly orchestrating four pots on the stove. Thus, giving you just enough time to clean your plate before she refills it with tapas that would make Tia Pol seem ho-hum.

This spirit of generosity carries through to the winery. Red Riojas – Crianzas, Reservas and Gran Reservas – are wines that are aged in cask and in bottle for years, before they are released from the winery. This means that by the time they have reached the shelf they are ready to drink. The producers take on the expense (in terms of dollars, space and time) to properly age the wines so you don’t have to think about it. As a New Yorker, who basically lacks all of those resources – muchos gracias.

So what does all this time hanging around the winery really do for the wine? A whole lot. Red rioja is a blend of several grapes – Tempranillo, Garnacha (a.k.a., Grenache), Graciano and Mazuelo (a.k.a., Carignan). These grapes have wonderful aging potential and with time, mellow and integrate to produce wines that are complex and smooth. In the right hands and with a little patience – simply put – these wines can be really…really good. Banana pudding good.

Martinez Laorden, Lanzado Crianza, 2004
We were impressed by this winery before we even took a sip of their wine. Martinez Laorden is the first bioclimatic bodega in the European Union. Basically, that means the winery was built to respect and work with the environment, or as you crazy kids say - is green. This wine has great acidity and layers of spice, pepper and cherry that balance effortlessly on the palate. Perhaps the good karma adds to the taste.

Senorio de P. Pecina, Reserva, 1999
We love that this wine reflects the terroir of Rioja without becoming a cherry-vanilla clique. This wine exhibited hints of these traditional notes but expanded with flavors of leather, earth and spice.

Lan edicion limitada, Rioja. 2004
There were so many unique qualities to this wine that it immediately caught our attention. Aromas of green pepper, jalapeno and black berries startled us for a second but married beautifully on the palate. Aged in Russian oak for four months (which is very rare) after spending 5 months in new French oak, may account for it’s multi-dimensional personality.

Lopez de Heredia, Vina Tondonia Reserva, 1999
This was our favorite wine of the trip and it’s not just because it was the perfect pairing to the ever-present Iberian ham (jamon), which was life-changingly delicious (officially we believe that is two notches above cojonudo). The smoky, gamey notes fondly reminded us of a great Northern Rhone Syrah. This wine is beautiful on its own and even better with food.

We left Rioja a few pounds heavier and with a brand new respect of what their wines can and should be. Our perceptions were changed, our vocabulary broadened and we even made a new friend or two who always has a place for us to crash - in our book, the marks of a perfect journey.