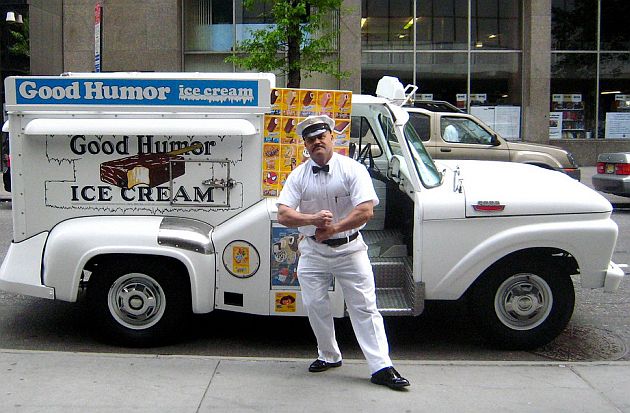 Say goodbye to the maddening ear-poison of Kool Man’s “Pop Goes the Weasel,” and harken back to the more civilized jingle of a bygone era: the gently ringing bell of the retro Good Humor ice cream truck. On Sunday Adam Kuban got the scoop of the week when he happened upon this atavistic enabler of sweet teeth outside the Museum of Modern Art.

The vintage customized Ford pick-up is just one of a fleet of Good Humor trucks that will be cruising New York City this summer. The fridge installed on the truck’s side keep the treats cold and accessible to the snappily dressed driver, Jose Martinez, who tells Kuban he hopes the truck will be more lucrative than his last job as Italian sausage vendor.

But first he has fight the more established ice cream trucks for a piece of turf. As the Times reports today, Ceasar Ruiz, a Mister Softee man on the Upper West Side, says his seniority entitles him to certain prime spots: “I sell Good Humor, too. But his is more cheap. I sell bar for $2. He might sell for $1.50. Not good. Not good.”

Martinez counters that Ruiz "doesn't own" the spots where he parks, and besides, Good Humor is "the original" ice cream truck. The feud is only going to heat up along with the weather, but let's hope it doesn't end in violence, like the 2004 ice cream truck rivalry that culminated in a savage beating.

#CREAM
#ford
#good humor
#ICE
#man
#manhattan
#new york
#nyc
#old
#retro
#truck
#vintage
Do you know the scoop? Comment below or Send us a Tip
A new Gothamist is coming! We’ve moved comments over to our beta site. Click here to join the conversation and get a preview of our new website.