Report: Gothamist at The StarChefs ICC 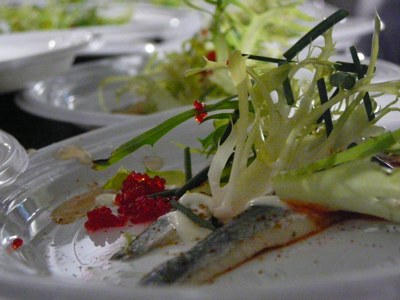 Earlier this week, StarChefs held its 2nd International Chef’s Congress on the top two floors of 7 World Trade Center. Open to industry professionals only, this annual event draws notable chefs from all over the world and provides the opportunity to honor its Rising Stars, an award the culinary organization gives to young professionals. A full list of this year’s winners, including Michael Anthony of Gramercy Tavern, Chris Lee of Gilt, and Daniel Eardley of Brooklyn’s Chestnut can be found here. This year’s winners were celebrated during the Rising Stars Revue Tuesday night at The Mansion on West 28th Street, which capped off the proceedings.

The 3-day event focuses on the sharing of special culinary techniques showcased in a series of live chef demonstrations. It's an opportunity for chefs to see fresh and rediscovered ideas in the food world, what goes on behind closed kitchen doors at some of the world’s best restaurants, and it’s kind of like the World’s Fair of cooking. A lot of the scheduled demonstrations gain momentum and buzz among attendee chefs, especially those who deal in what’s sometimes called molecular gastronomy, which is a term that not too many people use these days. So instead of talking about what they talk about when they talk about molecular gastronomy, most attendee chefs are just excited to see and taste things they’ve never experienced before. The Chef’s Congress is sort of like a 3-day extension of that moment in The Prestige when David Bowie, playing Nikola Tesla, throws the switch connected to all the coils: Sparks shoot out everywhere, and the crowd goes nuts. We covered the StarChefs International Chef’s Congress last year; what follows (many photos after the jump) is a detailed recap of this year’s program.

Sunday’s opening day demonstrations included Johnny Iuzzini of Jean Georges with a four-part dessert, the aptly named Dessert 4-Play. One component of the dish was a miniature square chocolate brioche panini filled with chocolate-hazelnut paste and fontina cheese. Iuzzini added candied and dehydrated black olives to the paste, then saved some for garnish. He held an olive to the audience and talked about a time in his life when he couldn’t actually eat olives at all: After school one day when he was younger, there was nothing to eat in the house. When the future chef couldn't find an appropriate snack to accompany The Dukes of Hazzard he ate an entire can of black olives, and even drank the canning juice. Now recovered from said incident, Iuzzini adds candied olives to his gianduja, and will next year publish his first cookbook based on his desserts.

Visionary Chicago chef Grant Achatz made a special appearance on a cookbook panel that also featured Jeffrey Steingarten, editor Ann Bramson, and literary agent Lisa Queen. Achatz is currently being treated for a rare form of squamous cell carcinoma of the mouth, but remains iconoclastic as ever. The chef explained that he will self-publish the Alinea cookbook next year, and that it will be distributed by 10 Speed Press. Alinea was named the best restaurant in the United States by Gourmet last fall. 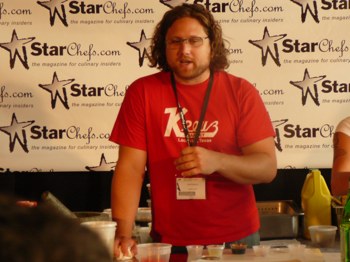 During a hands-on demo, Borough Food & Drink’s Zak Pelacchio presented a mini-primer of Malaysian street food in three dishes: banana leaf-wrapped skate; kerabu, a kind of bean salad dressed with lime and nam pla, and chili crab, whose recipe Pelacchio acknowledged is more from Singapore, with love, than it is Malaysian. While a plate containing neatly sliced cubes of belacan, or fermented shrimp paste, made its way around the room for close study (and smell), the street food demo participants gathered around long tables stocked with some kitchen equipment and mise en place assembled by team Pelacchio. Each table used a small mortar and pestle to grind young ginger, shallots, garlic, and crab paste to fry with quartered Dungeness crabs. “You really need a big one like this,” said Pelacchio, gesturing to the enormous pumice mortar on his workstation. “The ones you guys have on the tables there are more for grinding pills or something.” 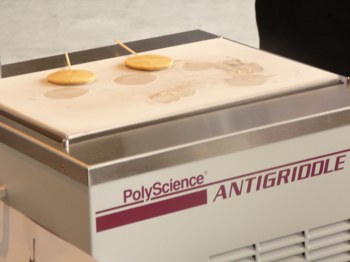 On Monday and Tuesday at the Chef’s Congress, much of the 52nd floor of 7 World Trade Center was converted into a product fair featuring vendors like Staub and The Chef’s Warehouse. Another booth was manned by representatives from PolyScience, makers of laboratory grade culinary devices such as immersion circulators used for slow temperature cooking. Flash frozen “lollipops” were also served to spectators, courtesy of the Anti-Griddle: a machine whose one-foot “cooking” square surface maintains a chilly 30˚ below zero. The lollipops were made from rosemary caramel crème anglaise. At lunch we ran into Will Goldfarb and asked him about the Anti-Griddle. “I like it,” he said, “I have one in my closet in Queens.” 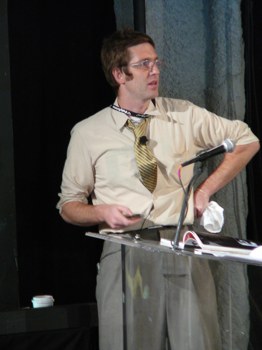 Tuesday morning, Goldfarb (right) presented “Experiential Cusine,” about the underlying ideas and emotions that connect the sweet and savory elements of his food. The chef, whose original Room 4 Dessert location closed earlier this summer, traced the evolution of his menu items, which are each to a different theme. Using an amazing arsenal of flowering herbs, baby beets, and other vegetables provided by Lee Jones of The Chef’s Garden that morning, Goldfarb plated an on-the-spot version of his dessert called Red. The chef also displayed screenshots of the Second Life version of Room 4 Dessert, called Mama Sugar.

During another demonstration, Wylie Dufrense talked about the new techniques and ingredients he’s been using at WD~50. During his presentation, helper chefs passed out individually packaged “pebbles” to the audience. Inside each box was a savory (grilled corn) and sweet (brown butter & banana) rocklike edible (but they weren’t rock hard all the same). Dufrense narrated a video showing the production of pizza-flavored pebbles, which were paired with pepperoni puree on the plate. Other pebble flavors team WD~50 had experimented with including carrot-onion, and bacon-pea. 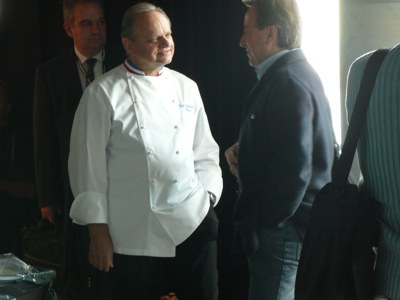 Two of the most influential chefs in the world: Daniel Boulud (right), talking with Joël Robuchon, who was about to begin his presentation on sous vide cooking with Bruno Goussault, inventor of the technique. Robuchon’s jacket collar was decorated with the colors of the French flag, while Goussault donned an ornate lab coat. Speaking through a translator, Joël Robuchon explained the benefits of the vacuum-packed process while the screen showed the preparation of a savory dish. A supreme of skin-on squab breast was pressed together with a foie gras. This was wrapped in a savoy cabbage leaf and a thick slice of bacon, and the whole thing was cooked sous vide. Robuchon explained how this is an especially unique way to simultaneously cook two different foods with radically different properties perfectly to temperature, something that would be virtually impossible using conventional methods. During a q+a session following his presentation, Robuchon gushed, “I used to think the best cooks were Japanese. I’m not just saying this because I am here, but the best cooks are Americans. I'm so impressed with the level of detail given by Americans. I’m proud of my cooks in New York and Las Vegas, and I'm so proud to be here today.”

Robuchon was also asked about his relationship with molecular gastronomy. “Xanathan gum is not going to kill you,” he said, using the chemical additive as an example. “But maybe it’s not necessary.” Later the chef added that he had nothing against using agar agar to change the properties of food, and then off-handedly related a short story about cooking an elaborate dinner in the middle of the jungle for the French equivalent of NASA. 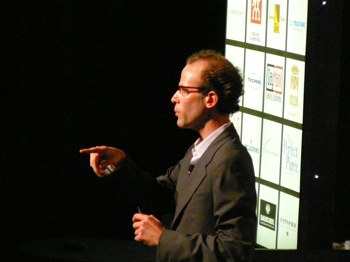 Dan Barber detailed the agricultural game plan used to make the most of the seasons and pasture space at Blue Hill at Stone Barns. His chefs passed out stalks of celtuse- a kind of lettuce- to the audience. Barber demonstrated how farmers are co-opting various technological devices on farms, such as using portable sonograms to measure the amount of marbling in lambs. The chef also explained how the act of lambs grazing on rotating parcels of farmland, followed by immediately by bringing the chickens into the same area, leads to better flavor: The lambs eat the grasses they like the best (Barber calls it “ice cream”), then the chickens come in an eat some of the grasses left behind by the lambs. More importantly, the chickens efficiently spread the lamb manure through the pasture, which leads to a quicker breakdown of organic compounds and to richer soil. This also reduces the need for artificial, petroleum-derived fertilizers. “Good ecology and good environmental stewardship,” said Barber, addressing the crowd of professionals, “both lead to good flavor. What we have today is a golden opportunity for chefs.” 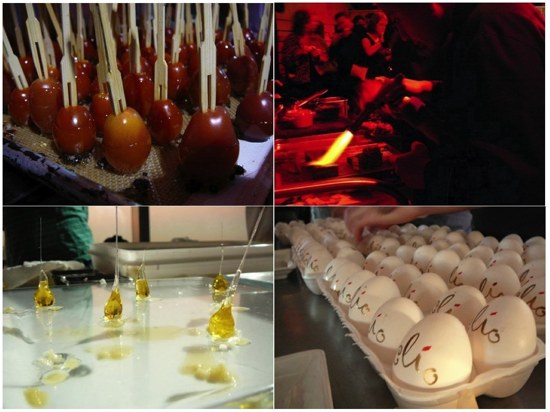 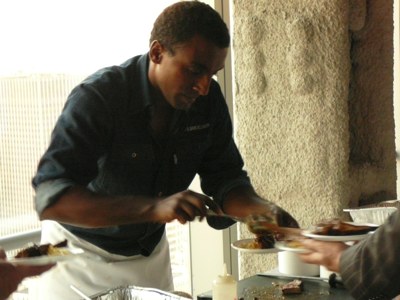 At Monday night’s cocktail party on the 52nd floor, Host Chefs including Marcus Samuelsson (left) served rack of lamb with mango couscous. The lamb was crusted with berbere, an Ethiopian chile-based spice mixture. In another corner, BarFry’s Josh DeChellis served kampachi with yuzu and Thai long pepper that had been chilled and sort of ziplocked between slices of prosciutto di Parma hours before serving, which gave the fish a salty-smokiness. Specialty cocktails included one called "The Tombstone" from NY-based Dave Wondrich, a Ph.D. in English whom the New York Times called “a living iPod of drink lore and recipes.” 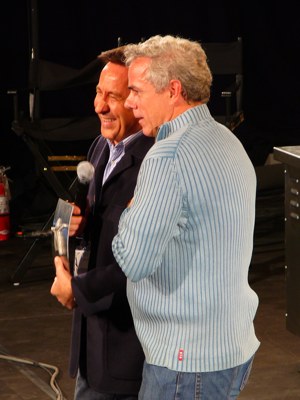 On Monday, the StarChefs ICC presented Daniel Boulud with the Mentor Award, a special designation for the chef determined by the Rising Stars to be the most influential. Onstage, Boulud suddenly stopped his speech and called over David Bouley, who had been watching from the wings. Bouley had just finished his presentation on the use of Japanese techniques with American ingredients, and ran out to greet his fellow Bou. The two hammed around for a few minutes and the French chef recounted how on his first visit to New York in 1981, Bouley invited him over for dinner. He accepted and they had a meal together. “He wasn’t even a chef then,” joked Boulud. “He was a wannabe chef.”

Innovative Spanish chef Oriol Balaguer did a demonstration of his “concept cake,” a kind of apple tart topped with ground Habas Saladas and arugula leaves. The dessert was topped with white semifreddo quenelles made from none other than A.O.C. Philadelphia Cream Cheese.

Chef Joseph Gaglio of Wisconsin said that prior to opening his Madison-based Gotham New York Bagels & Eats earlier this year, he shipped gallons of Wisconsin water to New York in order to research the theory that only pristine New York tap can make real bagels. He claimed the theory has been duly debunked, and has a successful bagel shop in Madison to prove it.

During his presentation, soft-spoken Spanish chef Andoni Luis Aduriz narrated an amazing video depicting a salad being delicately put together with elongated kitchen tweezers at his 9 year-old restaurant Mugaritz. It looked like surgery, but with flowers instead of organs. All told, the small plate was composed of more than 80 ingredients including beans, seeds, shoots, sprouts, leaves, blossoms, and fronds. It was beautiful. Aduriz reminded the crowd that all of the plate’s ingredients were local and seasonal. Along the same lines, the chef mentioned that while the use of mastic in his vegetable salad may appear to be along the lines of something faddish or unnecessary, the collection of mastic and its uses have been around for centuries.

top photo: Boquerones with Frisee and Piquillo Peppers, made by chef Harrison Mosher of Alta for Tuesday's lunch.