Did you know that KitchenAid mixers tend to vote Republican? (Also, Keurig coffeemakers lean Libertarian, and each Black & Decker toaster oven is built with a piece of Ralph Nader's soul.) During last night's presidential debate, KitchenAid's political preferences were laid bare when the social media manager at the helm of their Twitter account tweeted this after Obama invoked his sick (and now deceased) grandmother: "Obamas gma even knew it was going 2 b bad! 'She died 3 days b4 he became president'. #nbcpolitics" 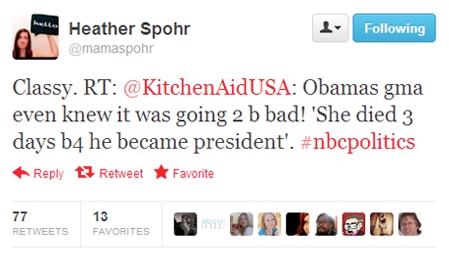 Hello, everyone. My name is Cynthia Soledad, and I am the head of the KitchenAid brand.

Deepest apologies for an irresponsible tweet that is in no way a representation of the brand's opinion. #nbcpolitics

Soledad told CNN that "a member of our Twitter team mistakenly posted an offensive tweet from the KitchenAid handle instead of a personal handle." She also said that person won't be tweeting under the esteemed mixer avatar anymore. Look for next week's 5,000 word piece in Poynter about how hiring a cabal of angry, Obama chain email-forwarding grandmothers to run your company's social media is a risky, yet intriguing idea.