Ed Schoenfeld may not be a household name, but to anyone who's paid attention to the city's dining scene over the past 40 years, he certainly is. "Eddie Glasses," as he's nicknamed, is one the city's (really, the country's) preeminent food experts, particularly in Chinese cuisine, and he's made a career for himself since the '70s as a restaurateur/host/consultant/food-world insider of formidable authority. Schoenfeld's first taste of fame was for running the front of the house at the four-starred Uncle Tais Hunan Yuan on the Upper East Side in 1973, and over the years he's been involved with everyplace from Shun Lee to Chinatown Brasserie. Years ago, Gourmet magazine dubbed him "the curator of Chinese food in America," and it still holds true today.

Most recently, Schoenfeld's been in the spotlight with RedFarm, his new and ragingly popular West Village restaurant with chef Joe Ng. We sat down for dinner with the gregarious, opinionated, and impressively candid restaurateur to talk about everything from the history of Chinese food in America to his family. What we've printed below is a small selection of our two-hour meal, which was filled with enough food to feed a small army, and enough interruptions from well-wishers and passerby to exhaust even the most seasoned celebrity. Here's a small taste of what it's like to eat with Eddie.

How did you first get interested in Chinese food and decide to pursue it as a career? As a kid growing up in the city in an intellectual, middle class family, my parents never went out to a French restaurant. And being a New York Jew, we would go eat Chinese food all the time. I had realized early on, when I was a little kid, I loved going to restaurants. I loved eating. So I thought it would really be fun to have a career like that. I started pursuing food in a thoughtful kind of self teaching pedantic way when I was about 16 or 17. And I decided to start taking cooking lessons, when I was about 18 or 19—

[Answer interrupted by the arrival of steamed vegetable and chive dumplings]—[Pointing to garnish] This is the tip of a flowering chive, as opposed to a garlic chive. When a plant bolts it grows quickly and develops a plant or a flower. So this is a chive that bloted. When a garlic chive bolts, the stem becomes crunchy and crispy, when a regular chive bolts the stem becomes woody and inedible. So in Chinese cooking, flowering garlic chives are a really unique vegetable. Something you don't see so often.

Anyway, to get myself educated in Chinese food in particular I started setting up Chinese dinner parties at different restaurants throughout the city. At the time I was going to NYU, but when I was 20 I dropped out to support my cooking habit. I started driving a taxi to support myself.

So how did you end up working in restaurants? Well, through these parties, I met a lot of restauranteurs and I became friendly with one of them and made a joke to him that if he ever wanted to hire a nice Jewish boy he should call me. Six months later he called me up and I became his assistant and we did the opening of Uncle Tais Hunan Yuan, the first Hunan restaurant in the United States. I was 22 or 23 years old.

To run a four star restaurant in New York, the kind of clientele you get is kind of amazing. We had crazy customers, iconic people. When Norman Mailer came in, who looked like a crazy guy, they stuck him near kitchen like was he a street person. When Warhol came in, they had no idea what to make of that. The whole Sulzberger family who owned the New York Times, really big time people. Jackie Kennedy and Aristotle Onassis, Elizabeth Taylor, Warren Beatty, Tennessee Williams, Lillian Harmon. For me it was enormous fun. I really loved that. 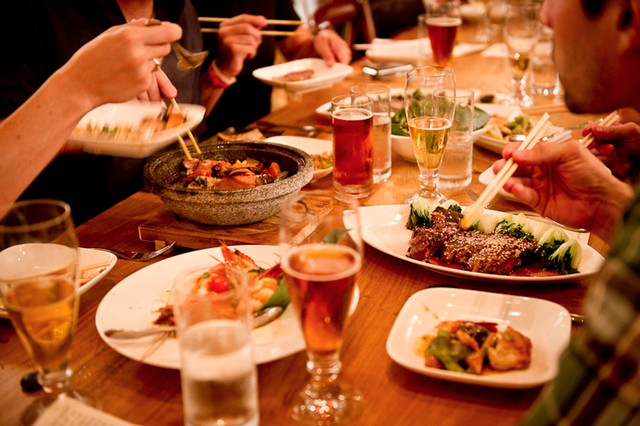 Do you think that New Yorkers have a different relationship with Chinese food than other Americans do? I think yes and no. I think that when I started in the business, Chinese food was the exciting Asian food. We had all these chefs coming into the country in the '60s and that's when we started getting all this authentic Szechuan and Hunan food. We moved away from Cantonese-American food. Szechuan food exploded and spread like wildfire.

Do you think the average diner recognizes the variation? Or are they just like, "that's Chinese food"? Chinese food became so popular that it morphed into the main home replacement meal. There's this enormous appetite for delivery and take-out. For the last 40 years people have been ordering in Chinese and it supplanted the Chinese restaurants with a kind of taken-for-granted experience. Then Japanese food became the hot cuisine. Chinese restaurants couldn't keep up with the Nobus. And when they tried to do something out of the ordinary they were so provincial that it was very hard to do something different.

Seems like now people get excited by going out to Flushing to eat offal or some obscure dish. In your generation, by and large, you prioritize authentic over delicious. There's a big difference now from the food I knew in the early seventies at Uncle Tai's. When I go to the best Szechuan restaurant in New York City and eat their best dishes, every single time without exceptions, I think that I am eating the B- version of that dish. If I go and eat shredded pork with garlic sauce or Kung Pao chicken which are really classic dishes that have a pretty set way of being made, to my palate they're almost all inferior, one after the other. If I go to Grand Szechuan and have the best food on the menu, I think its C+ to B-. 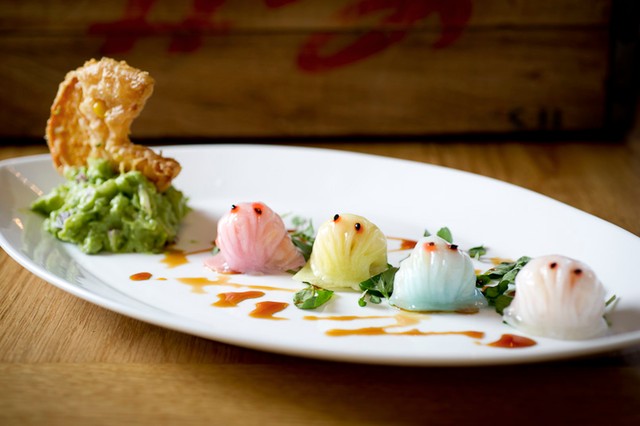 So what are you trying to do with RedFarm? It's pretty dissimilar to most Chinese restaurants in the city. What we set out to do was to showcase Joe's cooking and to put it in a more modern format and to do something that was more of a market-to-table Chinese restaurant which is something that is lacking....When I really sat down and had a heart-to-heart talk with [Joe] he said, "I want to make food that surprises me and my guests."

So are you prioritizing the delicious over the authentic? You know, I told Florence [Fabricant] at The Times that our food is unabashedly inauthentic and that we’re interested in making food that's delicious, and we don’t feel like we have any boundaries here. We’re not trying to make something that’s authentic.

Do you get any Chinese customers in here? Many.

What do you mean—that Chinese food for white people is boring? It’s not that it’s boring, it’s the stuff all over the country. If you look at the menu at the "best" Chinese restaurants and at the local take-out place, I bet you 70 percent of the items are the same. And this is an industry where creativity has been at a standstill.

[Answer interrupted by the arrival of sauteed black cod with yellow leeks]: This is black cod. Are you familiar with black cod?
A little bit, you don't see it on menus all that often anymore. Do you know why?
Is it un-environmentally friendly? No, it costs three times as much as lobster.

Do you think Chinese food, has it ever been cool? It was very cool in the 60’s and 70‘s. It’s cool here. That’s one of the biggest achievements of this restaurant is that it’s cool and it’s a business. This is the first Chinese restaurant to open in the New York market in 30 years that is exciting dining public and where people are like, clamoring to go out cause it’s something different.

#chinese food
#dumplings
#ed schoenfeld
#interview
#red farm
#west village
Do you know the scoop? Comment below or Send us a Tip
A new Gothamist is coming! We’ve moved comments over to our beta site. Click here to join the conversation and get a preview of our new website.