Our latest installment of Quick Bites brings us to Red Hook for burgers at a tavern.

THE VIBE
Even the more casual meat fans among you have probably already heard the news about Red Hook Tavern, Billy Durney's long-awaited followup to his essential Hometown Bar-B-Que. After about three years and a couple of concept switcharoos, the joint is finally open as of last week... and oh man is it a happy, raucous, soul-satisfying place to be.

Red Hook Tavern is designed as a kind of homage to classic NYC spots like Corner Bistro and Peter Luger, places with no patience for pretense but a whole lot of experience at making people feel good. The interior is all exposed brick, reclaimed wood, and wallpaper in decidedly untrendy patterns. The seating is perfectly comfortable without being cushy, with tables for around 20 which you can and should reserve because the place is going to be packed for the foreseeable future, and 18 backless stools at the bar, always set aside for walk-ins.

Other homey touches include the throwback lamps from the Franks' now-closed Prime Meats, and the old "Wines Liquor" sign swinging outside, a relic of the booze store that served this thirsty community for 85 years. On opening night last Thursday a giddy Durney was slapping backs and making the rounds, with business partners Missy Robbins and Sean Feeney (of Lilia and Misi), chatting near the window, but by Saturday evening it was just the regular Tavern staff in place, and they were handling the crowds with aplomb.

THE BITES
Durney spent months developing the Red Hook Tavern menu, but chef Allison Plummer, late of Park Slope's Lot 2, is the person in charge of feeding everyone on a nightly basis. Based on the two hefty meals I had last weekend, she is definitely up to the task. The star of the show is the Dry Aged Red Hook Tavern Burger, and it's instantly among the very best of its kind in the city. The patty is thick, intense, and cooked perfectly medium-rare, with gooey melted American, a sturdy sesame bun that does its job without a lot of fanfare, and a slice of raw white onion which miraculously complements rather than overwhelms the meat. It really is stellar.

Just about everything else I ate from here was delicious as well, especially the explosively juicy Romaine Wedge salad, the mountain of lettuce enlivened by bleu cheese, pickled mustard seeds, and a thick, smoky slab of Nueke's bacon; and the Little Neck Clams, which sat fat and tender in their pool of garlic, wine, and chili sauce, two slices of grilled sourdough almost making up for the fact that there was no linguine involved. Making an appearance on the menu on my second visit was a Brown Butter Roasted Fennel plate, and the headliner root was impressively not-woody, served on a bed of creamy bean puree, with green olives and pink peppercorns punching up the flavors.

Another standout, more modest in size, is the plate of Country Ham Croquettes, for which Durney smokes his own ham, adding sharp aged cheddar, a bit of mustard, and rye bread crumbs. These are crisp, creamy, and actually taste like all the things inside, instead of just being a ball of fried mush, which is too often the fate of this format. The Chicken Liver Pate platter makes for a pleasant, somewhat funky shareable snack, and the Easter Egg Radishes, which you dip into a smear of tarragon cultured butter flaked with cured egg yolk, were fun to munch down as well.

After all that meat, brine, garlic, and salt, some sugar is in order. Dessert currently consists of two ice cream sundaes, and on Saturday the Fior de Latte one (made with il laboratorio gelato), worked its sweet, frozen magic on me, thanks in large measure to the sticky, house-made hot fudge and an ample number of candied pecans. There are cocktails, all sorts of beer—including a Tribute to McSorleys Light Ale and Dark Ale—and wines by the glass and bottle. 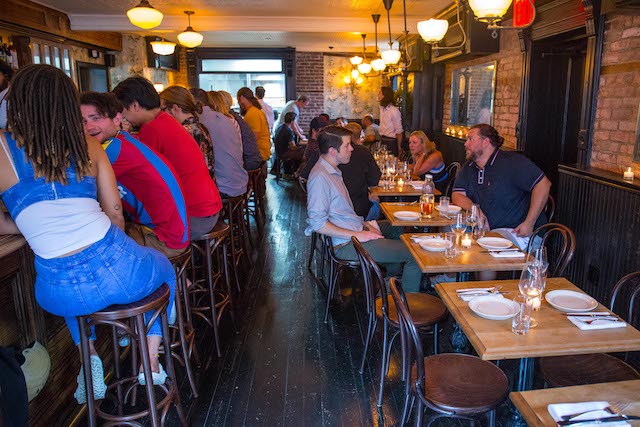 THE VERDICT
Red Hook Tavern is not cheap by any means—the longshoremen of neighborhood yore would likely be appalled by the $49 steak and $16 drinks—but Durney and crew have really nailed the welcoming feel of a regular spot. And the food is terrific, certainly worth a trek at least once from wherever you might be that's not right down the block.

#billy durney
#quick bites
#red hook
#red hook tavern
Do you know the scoop? Comment below or Send us a Tip
A new Gothamist is coming! We’ve moved comments over to our beta site. Click here to join the conversation and get a preview of our new website.