Red Hook Food Vendors Worth the Wait? Not for Line-Cutting Senator Schumer 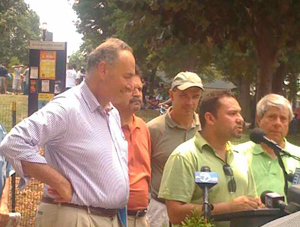 Yesterday’s notice about the long-overdue return of the Red Hook ball field food vendors elicited comments from disgruntled eaters who were disappointed by the new carts, which limit the vendors’ cooking space and caused massive, hour-plus lines. Commenter sofabait seems to reflect a growing consensus that the new Health Department oversight has changed things for the worse: “The exhaust fumes from their constantly idling trucks totally killed my appetite. Not sure if that is better for our health. The city sure knows how to fuck a good thing up.”

Or as Red Hook resident Jon Goch told 1010Wins, “It's completely changed and not for the better. It used to be very organic, more open, more social. Now it's just another city-controlled event. There was an awesome thing going on, and they came in and ripped the soul out of it.” And blogger I Am the Mill reports waiting on line Sunday for 90 minutes. Of course, queuing up is fine for some, but we can’t expect VIPs like Senator Chuck Schumer to join them:

He was there to give a little speech and try some food – the bastard cut right to the head of our line for a photo-op and a taco – but no one took more than a moment to care. All in all, this was not the ideal way to spend a Sunday… We were dehydrated, tired, hungry, and combative before we were even halfway to the front of the line. Chuck Schumer’s barging ahead of everyone was like a jalapeno right in the eye – while at the same time, a soccer ball to the groin.

Still, I Am the Mill says he plans to go back; it was “a living nightmare – but at least the food was pretty good.” And the Village Voice’s Sarah DiGregorio argues that “the vendors attracted the city's regulatory attention only when they became so popular with the wider community. Now that the vendors have spent $30,000 to get in compliance, I think they deserve our loyalty and our continued business.”

Photo courtesy I Am the Mill.

#ball fields
#eat
#food
#latin
#lines
#open
#red hook
#soccer
#vendors
#wait
Do you know the scoop? Comment below or Send us a Tip
A new Gothamist is coming! We’ve moved comments over to our beta site. Click here to join the conversation and get a preview of our new website.